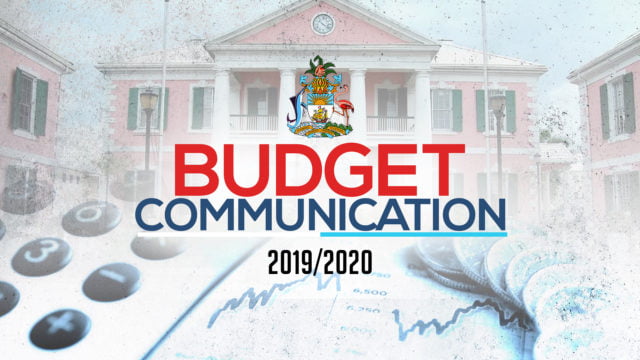 NASSAU, BAHAMAS – While the fiscal plan for 2019/2020 was void of any notable increases in taxes, the budget centers around maintaining debt repayment and across the board cuts to the allocations of several government ministries and agencies, which Minister of Finance K. Peter Turnquest explained as corrective budgeting.

During the budget communication delivered in Parliament yesterday, Turnquest said the government has been focused on resolving its arrears, meeting its mandated deficit and debt targets, while returning stability to the economy and exercising fiscal discipline.

He noted that despite constrained finances, the government has made key investments in the social welfare system, education, programs, services and infrastructure aimed at serving the electorate’s needs.

He recalled the “poor fiscal practices” of the previous administration, highlighting credit downgrades and protracted growth in the economy or lack thereof between 2012 and 2017.

Of the 2019/2020 budget, the minister said the allocations are geared to increase efficiency and reduce unnecessary spending on non-essential line items.

According to Turnquest, an analysis of the budget showed a “historic pattern” of overbudgeting.

This include personal emoluments where certain employees, who were no longer contracted and being paid, were still being budgeted for.

“As a result, you will see a reduction in the budgeted amount of salaries along with line items in every single ministry,” he said.

“This budget cut does not mean a cut in the actual headcount or in actual programs.

“It simply means we are budgeting properly to account for the actual commitment of the government.

“Time after time, in area after area, we have found cases where agencies did not spend all of their allocation. In fact, when the assessment was conducted, on average most agencies spent roughly 60 to 70 percent of their budgets.

“As a result of our in-depth review, we identified opportunities to surgically trim the budget, decrease fiscal inefficiencies and reverse the historical pattern of improper planning resulting in over budgeting with little outcomes. This Mr. Speaker is responsible, effective fiscal management.”

Meanwhile, the GFS deficit was the upcoming fiscal year was projected at $137 million or one percent of GDP (gross domestic product) – the lowest GFS deficit in the last 10 years.

Turnquest said, “Also, our one percent deficit to GDP ratio target will mean the lowest deficit ratio this land has seen in nearly two decades.”

The government plans to borrow nearly $87 million in the upcoming fiscal year. The minister introduce a resolution to borrow $72.38 million to cover the shortfall in the 2019/2020 budget, and a second resolution t borrow $14.55 million from the Caribbean Development Bank to fund a street light retrofitting program.

As a result of the borrowing, the national debt is expected to increase from $7.4 billion to $7.61 billion, the budget shows.

The government yesterday announced a series of measures intended to ease the burden on taxpayers, ranging from duty and excise reductions to maintaining tiered value-added tax exemptions on electricity.

According to Turnquest, these duty reductions amount to $28 million in revenue.

“In an effort to rebalance the tax burden between the provision of goods and services and reduce the attendant distortionary impacts, we are beginning to make good on our commitment to reduce duty and excise rates over the next three years,” the minister said.

“To that end, we will at this time, adjust the duty of selected frequently imported items.

“Generally, the focus of these reductions is around education supplies and equipment, and household implements and goods.”

Home refrigerators, stoves, fire extinguishers, pens, pencils, crayons, sharpeners, school rules, and chart paper, all of which varied in duty from 10 to 45 percent, will be duty exempt, Turnquest revealed.

Additionally, the finance minister revealed that duty on new vehicles between 1.5 and two liters — those with fewer than 200 miles — will be reduced from 65 percent to 45 percent, while duty on electric and hybrid vehicles valued at up to $50,000 will carry a duty rate of 10 percent.

Gifts of real estate among family will also be exempt from value-added tax (VAT) tax on the transfer, provided the recipient does not seek to sell the property within seven years of receipt.

However, the government increased the cap on real property tax payments of homes classified under ‘owner occupied’ residents from $50,000 to $60,000 per year “so as to augment revenue capture for higher end properties”.

Insisting there are no increases planned for VAT and “no new tax categories”, Turnquest said, “We outlined the plan last year.

“We have been faithful to the plan this year and we will continue to be faithful and keep our word with respect to the commitment that we’ve made to you when we raised VAT as a result of having to meet commitments that we met in office that had been ignored as the people and service providers had not been paid.”

The government increased VAT from 7.5 percent to 12 percent in July 2018, amid great public push back.

The announcement of the VAT hike was made during the 2018/2019 budget communication.