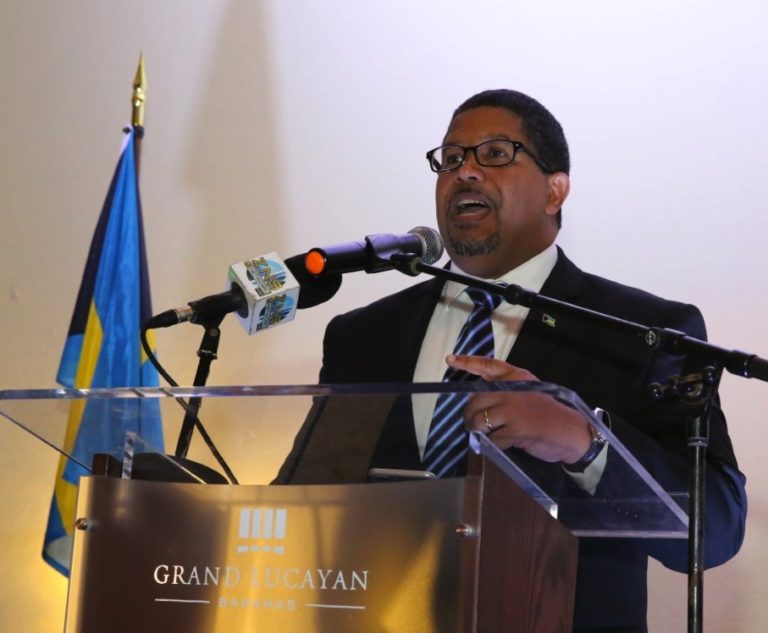 FREEPORT, Grand Bahama – There has been an increase in the Labour Force of 1.8 percent in the country, giving hope that “we’re turning the corner” the Deputy Prime Minister and Minister of Finance, the Hon. K. Peter Turnquest, said on Friday.

The Deputy Prime Minister and Minister of Finance made this announcement during the Grand Bahama Chamber of Commerce Annual Installation of Officers and Directors at the Grand Lucayan resort.

Mr. Turnquest performed the task of installing the Chamber’s officers, but just before doing so, he shared the information that had been released at 12:30 p.m.

Giving a bit of good news, the Deputy Prime Minister said the Labour Force increased to 203,730, or 1.8 percent.

“Now for the bad news. Unfortunately, the conditions of school leavers drove up the unemployment rate by a modest .2 percent.”

This figure, he said, is something to be proud of because it could be a lot worse.

“So, while it’s not big news we’re all very appreciative for all of you who would responsible for that .3 percent decline in unemployment here in Grand Bahama, and it’s no surprise where that decline happened. It’s primarily in the transportation sector looking at the Container Port, the Harbour, Shipyard and related companies.”

Congratulating the business owners on the work they are doing in the Grand Bahama community, Deputy Prime Minister Turnquest said their efforts are not lost on the Government or the Ministry of Finance knowing the challenges that exist both in Grand Bahama as well as throughout the country.

“But the good news is that we believe, we are starting to turn the corner and that 2018 is going to be another year of recovery for us here in Grand Bahama and throughout the country. I want to encourage you to continue to persevere. I know it’s not easy but the corner is coming.”

In closing, he said, it is expected that good things will happen in Grand Bahama in the coming months.