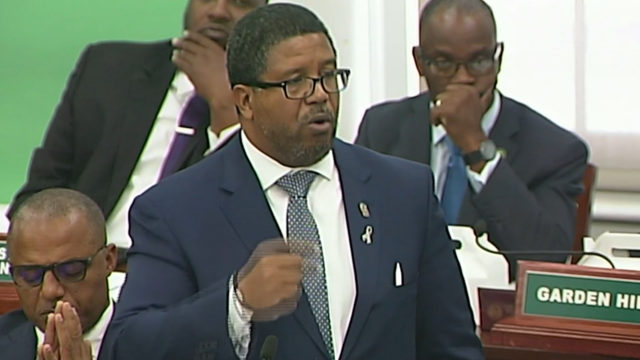 NASSAU, BAHAMAS – As the government finalizes its 2019/2020 budget which is expected to be tabled next month, Deputy Prime Minister and Minister of Finance Peter Turnquest declared in Parliament yesterday that there will be no new tax in the form of an income tax and no further increases to value-added tax (VAT).

He said the government, however, has to explore various taxation scenarios in order to be prepared to evaluate its options and have a thoroughly researched response to any request from international financial sector watchdogs.

“Any decision that we make as a country going forward must be based upon empirical data.

“And so, let me debunk again, for those who are out there spreading that the Ministry of Finance is talking about that it is intending to raise value-added tax or to implement any corporate income tax or any personal income tax, that is absolutely untrue.

“There is no such initiative. However, the Ministry of Finance and its agencies are doing the prudent and required thing to ensure that we do the research so we know the alternatives that are available, so in the event we are called upon to make a policy suggestion or recommendation we are armed with the information Mr. Speaker.

“The Ministry of Finance is in the process of restructuring, and we are setting up an economics unit that is going to be particularly aggressive in the research of our economy, so that again we are able to provide options to the government as and when it may be required, and that is not just this government.”

In that effort, the minister said the Minnis administration will also strengthen the Department of Statistics, which compiles key data on the country ranging from the labour force to poverty studies.

“In order to make sound decisions it must be based upon fact,” Turnquest added.

“That is where we are today.

“That is where The Bahamas finds itself in the evolution of governance and we must make sure that we are doing justice to our people by not only by making good political decisions, but making good, sound financial decisions, so we do not do what we have done in the past — laden our children with bills and debt of the past.”

While in opposition, Dr. Hubert Minnis, the now prime minister, pledged to repeat VAT on breadbasket items as well as on all baby and children’s clothing, utilities, and health coverage and insurance.

He accused the Christie administration of being lazy by increasing taxes to the detriment of the poor people in The Bahamas.

However, the government increased the base rate of the tax from 7.5 percent to 12 percent in July 2018, citing it was unpopular, but necessary as a result of the previous administration’s fiscal mismanagement, overspending and unpaid obligations left to resolve by the Free National Movement administration.

The increase was announced during the budget communication of May 30.

There was widespread rejection of the increase.

By way of its fiscal strategy plan and new reporting standards, the government has projected to achieve an annual budget surplus within three years.

In February, the government advised that its revenue projection for this fiscal period was revised and forecasted to fall short by $185 million due in part to lower than expected VAT collection, the delay in the establishment of the Revenue Enhancement Unit, which is forecasted to collect around $80 million in incremental revenue, and the renegotiated tax structure for gaming houses.