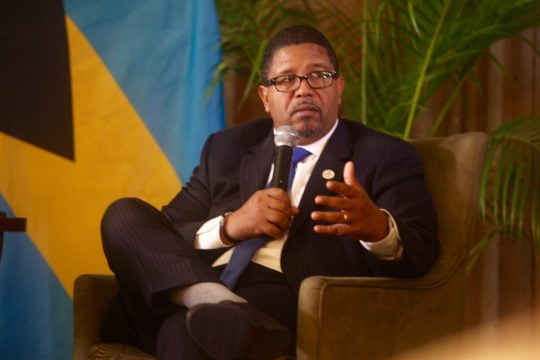 NASSAU, BAHAMAS — Deputy Prime Minister and Minister of Finance, K. Peter Turnquest, announced that the Ministry of Finance has developed a new Budget website (soon to be completed) at: bahamasbudget.gov.bs

“The Budget website will help to simplify the national budget and break it down into non-technical language,” DPM Turnquest explained during the National Budget 2019/20 Press Conference held at the British Colonial Hilton, Thursday, May 30, 2019.

He along with the Financial Secretary, Marlon Johnson also took the time to answer questions posed by the country’s national media.

The DPM noted that the website will showcase all the benefits in the budget for:

He said, “Starting today, you can visit BahamasBudget.gov.bs and from the Coming Soon page, you can click to read an online version of the Budget Communication, and download the budget tables if you wish.

The DPM also explained the government’s Tax Plan for the new Budget, which included tax relief, the government’s transition to a client-centred or customer service focused tax administration and collection system, as well as new tax measures.

DPM Turnquest said that during the 2019/20 Budget Communication, he announced that there is no increase in Value Added Tax, and there are no new tax categories.

“Our central approach to revenue this year is about making the government more efficient and productive in the administration and collection of existing taxes and increasing compliance by making the tax system more transparent and fair.”

He stated that the government is doing a number of things to make it easier for Bahamians to interact with the tax authorities.

It can feel difficult enough to simply have to pay taxes, so there is no excuse for the government making it difficult to comply, being disorganized and inefficient.  That just makes Bahamians have to depend on that favour of a politician or bureaucrat to perform simple tasks.”

The DPM also noted that at Customs is rolling out a new online system called Click2Clear that will make customs processing, fast, paperless and convenient.

With Real Property Tax, he said the government is updating the land register to bring about 9,000 unregistered properties into the fold so everyone pays his or her fair share. “We are making the system of valuing properties more transparent and data driven.”

He said, “At Business Licence we are allowing businesses to file their annual returns at different times during the year. For new businesses that are deemed low-risk, we are providing a Provisional Licence, valid for 90 days. That means, you do not have to wait on the bureaucracy to get your business up and running.”

DPM Turnquest also noted that to promote tax fairness, the government is streamlining all of the different tax tribunals and appeal bodies into one Single Tax Appeal Commission.

He said, “A major part of our tax plan this year, is getting the government’s affairs cleaned up so that we can be better partners to Bahamians.”

This story was written by Llonella Gilbert – Bahamas Information Services.