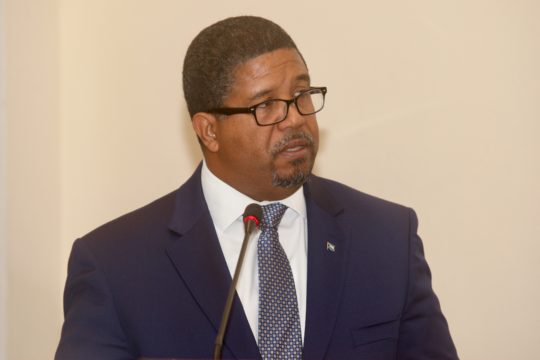 NASSAU, BAHAMAS — Deputy Prime Minister and Minister of Finance the Hon. K. Peter Turnquest expressed on Monday that having a strong and effective partner in government is an important ingredient to sustainable growth and development.

DPM Turnquest was the keynote speaker at the inaugural CFAL BudgetPass 2019/20 Conference held at Baha Mar on Monday, under the theme “Striking the Right Balance.”

He said the 2019/20 Budget is unlike any budget before in three major ways:

“This represents a deliberate move towards a more modern form of budgeting and public sector accountancy that sets the right foundation for sustainability in all of our endeavours.

“As we continue to usher these changes in, they will have a profound impact on the management of taxpayer money now and in the future, and therefore increase the likelihood of long-term fiscal stability, a stronger economy and socio- economic transformation.”

He noted that the the business community will play an important role in keeping the government on track, particularly through its representation on the Fiscal Responsibility Council.

The DPM explained that this independent civil society body is established by the Fiscal Responsibility Act (FRA) to foster budgetary discipline, and to promote the government’s adherence to sound fiscal decisions that take into account the economic impact they will have on the economy. “We expect the Council to be vibrant and active in playing its role.

“As it relates to fiscal targets, the FRA binds the government to a strategic plan to meet core fiscal goals. These include: Achieving a sustainable level of debt of no more than 50 percent of Gross Domestic Product (GDP) over the medium term, and a target fiscal balance that does not exceed 0.5 per cent of GDP by 2020/21 and beyond.”

DPM Turnquest said that he does not think the full weight of this law has fully registered with the Bahamian people, but it should be known, it has the power to ensure the government strikes the right balance with its priorities and policies, while handling taxpayers’ hard-earned money in a responsible and transparent way.

He said, “Our deficit has been on a downward trajectory since this Administration took office, and as we continue to meet our fiscal goals we will undoubtedly have more resources to devote to other areas of economic and social reform that will have an indelible impact on the lives of our people.”

This article was written by Llonella Gilbert – Bahamas Information Services.