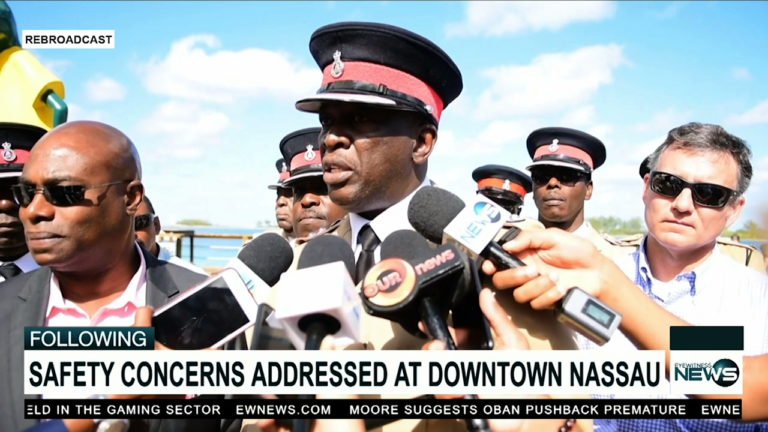 NASSAU, BAHAMAS – Recent concerns raised regarding the safety of tourists in Downtown, Nassau has prompted the Ministry of Tourism and Aviation’s safety and security committee to announce its intent to re-develop the downtown area.

The committee confirmed as much on Monday, following a walk-about of Downtown, Nassau led by Chief Superintendent Bernard Bonamy, Officer-in-charge of the Central Division.

He told media that all signs point to new life in Downtown Nassau.

“We had some concerns from tourists last year, one of which who slipped down sometime last year because of an uneven road and almost hurt themselves, so that’s one of the main concerns that we want to fix,” Bonamy said.

“We are also looking at adding lighting to the area. There are vessels that sometimes overnight in port and there are tourists who walk the wharf during the nighttime, so we need to have better lighting conditions.”

Chief Superintendent Bonamy opined that it might be a good idea to reintroduce a police booth on the wharf for added security.

“Some years ago, that was there and so I will speak with the commissioner to see if we can bring that back so that can assist us with our policing of this area; both during the day and during the night,” he said.

Downtown vendors are hoping that government’s strategy includes improved cleanliness and a revamping of infrastructure.

“I look at Bay Street and its pretty dirty and not as clean as it used to be,” said one vendor that chose to remain anonymous.

“It’s a lot of old dilapidated buildings and shops that have been closed for years. They are eye sores and need to be cleaned up most definitely.”

The logistical details of the security plan remain unclear but Chief Superintendent Bonamy confirmed that police presence will be beefed up in the Downtown area and revealed that police walkabouts will be an ongoing initiative moving forward.