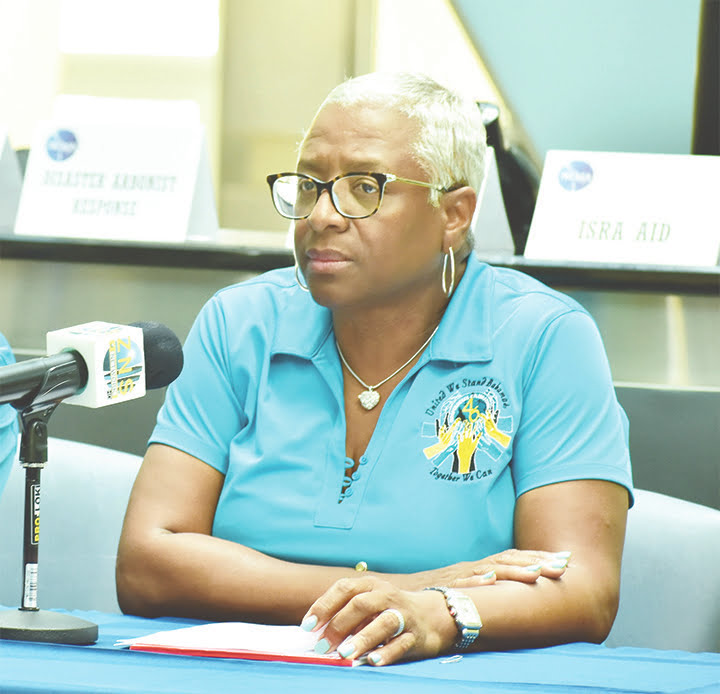 NASSAU, BAHAMAS — The Disaster Reconstruction Authority (DRA) has paid out over $3 million so far in its Small Homes Repairs Programs for people whose homes were damaged during the passing of Hurricane Dorian last year.

In an interview with Eyewitness News yesterday, the DRA’s managing director Katherine Forbes-Smith gave an update on the government’s temporary and permanent housing initiatives, as the country nears the one-year anniversary of the deadly storm.

Forbes-Smith said just over $3 million has been paid out between Abaco and Grand Bahama to vendors who are providing building supplies and architects, construction workers and contractors who are doing work in the disaster zone.

She said over 4,500 people registered on the program’s website, but some did not qualify.

While she admitted that the DRA could be doing things differently with the program, she noted that authority is also making progress through its partnerships with NGOs.

Forbes-Smith said the authority has teamed up with a number of NGOs including Little Abaco and Church-by-the-Sea which provide supplies for damaged homes and the DRA covers the cost for labor.

“We have employed local contractors in Abaco, who are providing the labor to make sure the materials are getting on the homes and the roofs are getting fixed,” she said. “We will continue to look to collaborate with NGOs on a number of other projects on stream.”

Marsh Harbour and Central Pines were hit the hardest in Abaco.

In Grand Bahama, High Rock, McLeans Town and Sweetings Cay took on the brunt of the storm.

There remains a significant need for temporary housing on the island over 10 months after the storm.

Forbes-Smith revealed yesterday that some 20 families on Sweetings Cay will receive 20 x 20 container housing units, which were donated by a private donor.

“We are just working on logistics on getting those units on the Eastern end of the island, and as you know, getting things over to Sweetings Cay can be a challenge,” she said.

“It’s a logistical nightmare for us, but we have to get those temporary units to Sweetings Cay.”

She also noted that some 40 dome homes will be shipped to Grand Bahama, hopefully by the end of the week, also slated for the eastern end of the island.

Forbes-Smith said the homes will be distributed to those most vulnerable, including senior citizens, anyone disabled, and families with minor children. The main criteria however underscores that the applicant’s home had to have been destroyed by the storm and they must be Bahamian.

“We do have a list already,” she said,  “but people got to understand, everybody isn’t going to get it at the same time.

“We are trying our very best to make sure that we address the most vulnerable in our community and that is what we are trying to do.”

She could not indicate how many people are on that waiting list for housing.

She noted that the same process will be utilized in Abaco.

Forbes-Smith advised that 32 domes have been erected in Spring City and another 100 will be erected on the property of homeowners whose houses were destroyed.

She said that process started yesterday.

“The deadline to have every dome on people’s private property is by the end of July in Abaco,” she said.

The government has also pledged that in addition to providing temporary housing, it will also seek to address permanent housing solutions for the residents in the disaster zones.

Forbes-Smith noted that the government is currently working on four housing projects on Abaco, and others on Grand Bahama.

The sites identified include two 60 acre sites in Marsh Harbour and Wilson City.

“We are now going through an evaluation process of all of those pre-qualification notices of persons who would have sent in their interests,” she said.

“And there will be a meeting with all the individuals after the shortlisting has been done, to have further discussion about what the government and the DRA is looking for in the development of these subdivisions.”

Forbes-Smith noted that there is a timeline on the project, with construction expected to begin in January 2021.

Another area in Murphy Town is also being surveyed to develop a subdivision, she said.

Additionally, the government has entered into a public-private partnership with the Discovery Land Company to develop 46 homes that will be gifted free of charge to 46 families in Central Pines.

“From what I understand in my early discussions, obviously there is Bahamian labor in Abaco for the construction of those 46 homes.”

She added that it is expected that those homes will begin construction on August 1.