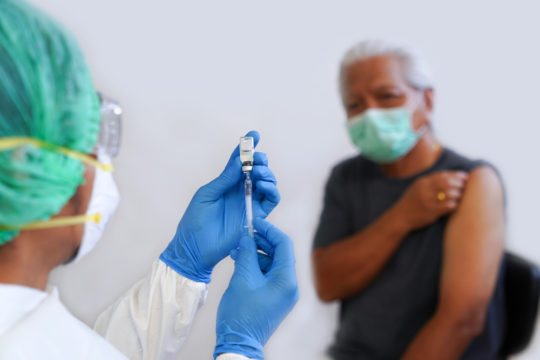 NASSAU, BAHAMAS — Acknowledging some initial “hesitancy” among some sectors of the nation towards the coronavirus vaccine, Minister of Health Renward Wells said the feedback from the general populous has been pro-vaccine, which bodes well for the government’s vaccination program.

Last month, former Minister of Health Dr Duane Sands told Eyewitness News that the hesitancy expressed by healthcare workers in The Bahamas and other organizations about taking the vaccine is “not to be taken lightly”.

He suggested the government needs to make more raw data available to these groupings and the general public to allay some of the “very real concerns”.

In an interview with Eyewitness News outside the House of Assembly, Well said: “The reality is if you are in the healthcare sector, and you have something that can prevent you from getting this disease, if you choose not to take it, it is [your] responsibility. You’ve made the decision.

“The government is not going to force it on you. We’ll keep working. But you have to understand, too, that this train is going to leave the station.

“We’re going to open up the economy, people are going to be moving around, so you have to decide whether you are going to get on the train or stay on the sidewalk.”

The Bahamas is expected to receive 100,000 doses of AstraZeneca in two tranches.

The government has assured vaccination will be voluntary.

In separate interviews with Eyewitness News, healthcare professionals, including laboratory staff and the consultant physicians; the Bahamas Public Services Union (BPSU), which represents thousands of public servants; and other bodies have expressed mixed views of the COVID-19 vaccine.

Meanwhile, the Police Staff Association (PSA) has said officers will trust and follow the advice of medical professionals on the vaccine and are willing to take it.

In a recent interview, Royal Bahamas Defence Force Commodore Raymond Dr King said while the organization will follow suit with the government and allow marines to choose whether to take the COVID-19 vaccine, the consensus from meetings with officers was that “the general body is still apprehensive about the vaccine and were grateful for the briefing sessions to obtain greater clarity on the matter”.

Vaccine hesitancy has been a challenge the world over.

An analysis in the United Kingdom, where a more contagious variant of the virus has surged, showed disparities in vaccine uptake among healthcare workers, those under 30 and those in the most deprived areas.

While noting the prime minister will make an announcement on the vaccine, Wells said the government’s plan is sound.

“And then to work on ensuring that you have the second shot anywhere between the eighth and twelfth week, which gives you an additional protection, but I believe that the studies do show that with AstraZeneca, you can have anywhere between 60 percent and 70 percent effectiveness against the virus. The second shot then gives you an additional efficacy.”