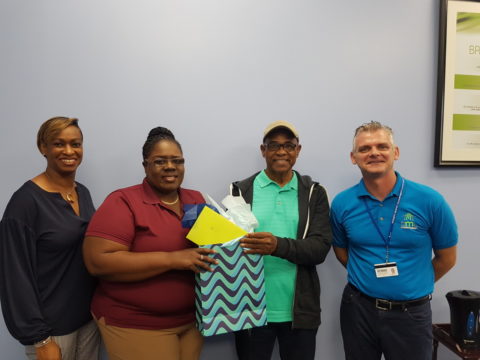 NASSAU, BAHAMAS – Domino’s Pizza delivery driver Kermit Culmer is putting his car in park and retiring after nearly two decades at the local fast food franchise. Since joining the team in March 2000, the company estimates that Mr. Culmer has delivered more than 100,000 hot, fresh pizzas to customers.

A lot has changed since Culmer, known by his teammates and customers as “Mr. C”, started at the Domino’s Golden Gates location. His first door-to-door deliveries were processed manually with customers calling in all orders by phone. On his last day on the job, more than half of the pizzas he delivered were ordered and processed online via www.dominos242.com.

Over the years, Culmer’s commitment to keeping his loyal customers happy and his dedication to working as a part of a team remained consistent.

“Mr. C. has spent many years on the frontlines of our Domino’s brand, delivering a level of service that our customers expect and demand. He has seen many changes as the franchise evolved over the past two decades and we want to thank him for his dedication to our core values and to congratulate him on his well-deserved retirement,” Watchorn said.

Last month at Mr. C’s retirement party held at AML’s head office, the management team presented the long-serving employee with a monetary gift and a plaque to show their appreciation for his many years of upholding the company’s core values.

Mr. Culmer thanked his work family for recognizing his many years of service. He also left sound advice for the team members who remain at Domino’s. “Come to work every day and do what you know how to do.  Deliver pizzas to the door and make the customers happy.”

Domino’s is the country’s largest quick-service pizza franchise. The brand opened its first location in The Bahamas more than 25 years ago. Today, some 200 employees work at 11 locations on New Providence Island and Grand Bahama Island.