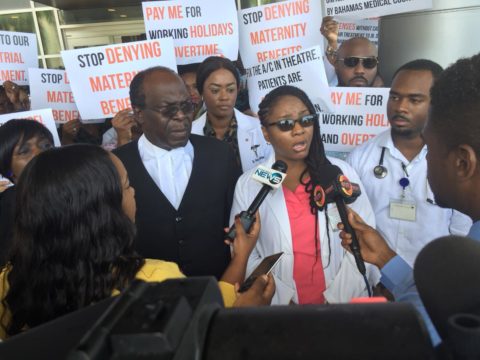 Dozens of doctors gathered outside the critical care block at the Princess Margaret Hospital on Wednesday in protest of what they call “years of systematic discrimination”.

The doctors – who demonstrated for about half an hour – were joined by members of the Nurses Union as well as the Trade Union Congress.

The junior doctors expressed a host of concerns including a faulty air conditioning unit in the operating rooms and the lack of maternity benefits.

Doctors Union President Melisande Bassett said for years the doctors have been bloodied, abused and marginalized and they are tired and will not take it any longer.

“Why is it that the government is allowed to refuse to play double time for persons to work on holidays and why do the Public Hospitals Authority (PHA) and the government refuse to pay its female doctors for maternity leave?” Bassett asked.

“We have been shackled for years for our oath, to first do no harm to our patients.

Nurses’ Union president Amancha Williams said if the doctors take industrial action so will the nurses.

“We are taking a stand because the health of the nation is the wealth of the nation. Poor health, poor nation and so you have the nurses and the doctors together and that is not good for the government,” she said.

President of the TUC and attorney for the unions Obie Ferguson said there will no backing down and no comprising.

“The union wants these issues to be addressed they want to be treated as professionals we want respect from the government, that’s all, they have earned it and they want it,” Ferguson said.