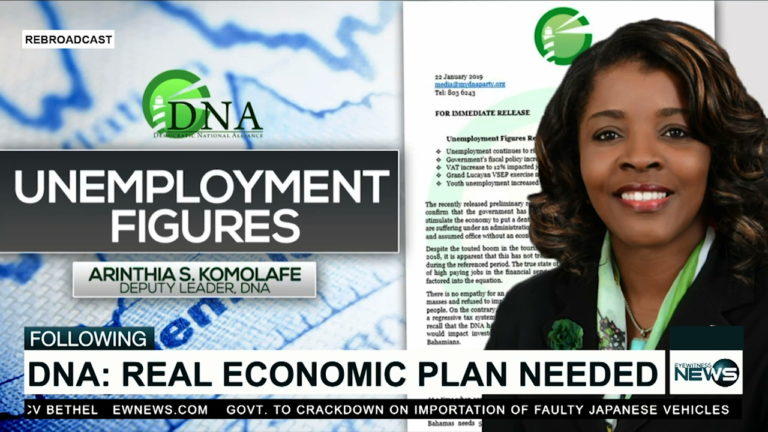 Says govt. has failed to provide incentives to put a dent in unemployment

NASSAU, BAHAMAS – The Democratic National Alliance (DNA) is unimpressed with unemployment statistics recently released in the 2018 Labour Force Survey, and have labelled the Minnis Administration as being “irresponsible and out of touch” with the electorate.

The survey, which was released on Monday, revealed that unemployment in New Providence increased from 10.1 per cent to 11 per cent; which means that overall unemployment grew by 3.4 per cent.

Arinthia Komolafe, Deputy Leader of the DNA, via a press statement issued yesterday, said the Free National Movement (FNM) government has failed to sufficiently provide incentives that would help to put a dent in unemployment figures.

“The recently released preliminary results of the labour survey confirm that the government has failed to adequately incentivize the private sector and stimulate the economy to put a dent on unemployment figures within our nation,” she said.

“Our people are suffering under an administration that failed to prepare for governance while in opposition and assumed office without an economic growth plan.

“There is no empathy for an administration that has done little to alleviate the suffering of the masses and refused to implement deliberate policies aimed at economic empowerment of our people.”

The deputy leader said that there will be no sympathy for the administration as they have done little to lighten the suffering of the masses and refused to implement methodical policies aimed at economic empowerment of Bahamians.

“Surviving under a budget of hardship and an increase in the cost of living, the increase in the unemployment rate from 10.1 per cent to 11 per cent on New Providence is significant seeing that the nation’s capital accounts for 70 per cent of the employed labour force,” Komolafe argued.

“This rise far outweighs the minimal decrease in unemployment in Grand Bahama and modest fall in Abaco.

“The released statistics show that the government continues to also fail the youth of our nation as unemployment within this important category stood at 23.1 per cent in November 2018 when compared to 20.1 per cent in May 2017.”

The DNA maintains that “deliberate actions, steps and initiatives have to be undertaken to achieve the desired and target growth levels.”

“On behalf of the Bahamian people, we petition the government to get its act together and implement an articulated economic growth plan or vacate office. There is too much at stake and our people have been suffering for too long,” Komolafe concluded.