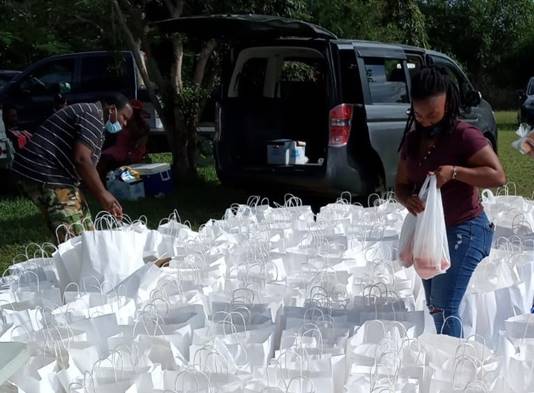 Disney Cruise Line VP of Public Affairs Kim Prunty said: “We know this year has been difficult for so many of our co-workers and friends in The Bahamas. Joining with community leaders, our team made it a priority to help feed local families during the holidays at a time when this assistance is more important than ever.”

Each dinner-in-a-bag was delivered directly to residents’ doors on Eleuthera and was filled with holiday favorites such as whole roasters (chicken), eggs, macaroni noodles, cheese, a variety of canned goods and fresh produce to help residents prepare their meals.

Shelly Johnson, coordinator of this year’s food distribution efforts in Eleuthera, said: “Without the support of Disney Cruise Line and others, this year’s event would not have been possible. We’re incredibly grateful to Disney for their ongoing support of the Eleuthera community, especially during these challenging times, and look forward to brighter days ahead for our community.”

In a press statement, the cruise line said: “Disney has supported communities in The Bahamas in a variety of ways for more than 20 years. Such outreach efforts include hosting reading programs, bringing Disney characters and gifts to children and in Nassau and the Abaco islands to celebrate the holidays and extensive support for conservation programs, among other initiatives.

“Disney has also made significant contributions to Hurricane Dorian relief and recovery efforts, including a $1 million donation to non-profit organizations and more than $500,000 in supplies for impacted communities and direct assistance to Disney’s Bahamian employees.”

The company also outlined several initiatives it has undertaken on Eleuthera, including: funding previous holiday events for children and seniors across Central and South Eleuthera; sponsoring local Junior Junkanoo groups; providing support to after-school programs; and entering into an agreement with the Access Accelerator Small Business Development Centre (SBDC) and the Eleuthera Chamber of Commerce to provide more than $1 million over three years to fund a new Eleuthera Business Center and additional training and support to small business startups on Eleuthera.

It has proposed a cruise ship port at Lighthouse Point, Eleuthera, which has raised concern among environmentalists although the company has insisted the project — if approved by the government — would be environmentally friendly.

In its recent statement, Disney Cruise Line advised that more information on its community efforts in The Bahamas can be found via its website lighthousepointbahamas.com.