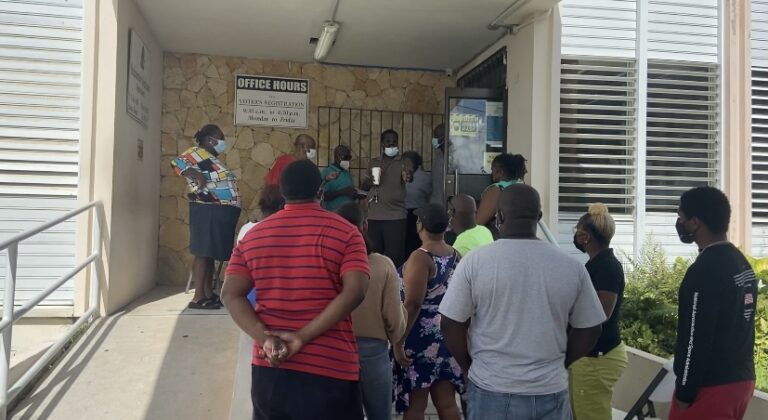 Dozens of Bahamians wait outside the Parliamentary Registration Department moments after Parliament was dissolved on Thursday, August 19, 2021.

NASSAU, BAHAMAS — Dozens of voters at the Parliamentary Registration Department (PRD) were turned away yesterday just minutes after Commissioner of Police Paul Rolle, in his capacity as provost marshal, read a proclamation from the governor general dissolving Parliament as of August 19.

Once Parliament is dissolved, eligible voters are no longer able to register for the first time or transfer their address.

Eyewitness News was on the scene at the PRD as workers broke the news to the individuals waiting, who immediately became angry, frustrated and confused.

One voter, who asked not to be named, said she was simply trying to make an address transfer and labeled Prime Minister Dr Hubert Minnis’ decision to dissolve Parliament and call a snap election yesterday “unfair”.

“For the government to do this with no notice, no transparency, is wickedness in high places,” she said.

“Ready or not, the general election coming, but it’s not right because at the end of the day, the government has a responsibility to let people know.

“He should have put the country on notice and let them know [to] go out there and register… They probably told their party they were about to do it. It’s not fair and it’s wicked politics.”

Anthony Pratt, a resident of Golden Isles, said he was seeking a replacement for his damaged voter’s card — which is still being facilitated by the department — but was shocked by the “out-of-the-blue” announcement.

“I wasn’t expecting Parliament to be dissolved so quickly,” Pratt said.

“He (Minnis) didn’t give a lot of Bahamians a chance to register or change registration because we weren’t expecting it until next year.

“… It’s a stab in the back to the Bahamian people. The present administration, they don’t care about our means and our feelings because if he cared about how the Bahamian people felt and he wanted it to be a fair election, he would have done it in a more diplomatic way.”

Pratt said that while he is fortunate to be able to exercise his right to vote, he feels it is a “slap in the face” to first-time voters.

Another voter who was turned around, and who asked not to be named, said he is not prepared to vote in a constituency he doesn’t live in.

“At this point in time, I live in Ridgeland; I don’t live in Golden Gates,” he said.

He said he wished at least three or four days’ notice was given to allow people to get their affairs in order.

According to Acting Parliamentary Commissioner Lavado Duncanson, as of Thursday, the voters’ register stood at 194,320 voters.

Duncanson explained, however, that there are individuals who are eligible to be added to the register under Section 25 of the Parliamentary Elections Act.

This is what happens in a Banana Republic like the Bahamas. There should be a set election date.