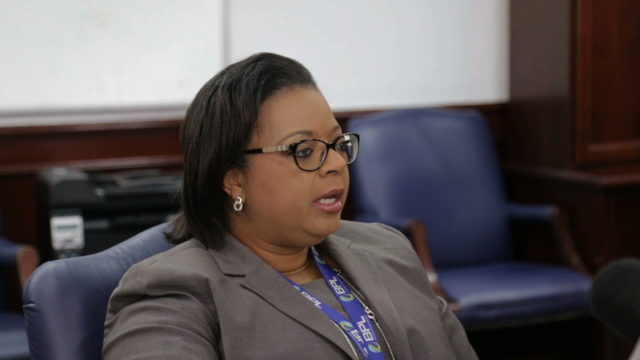 Former chairman of Bahamas Power and Light (BPL) Darnell Osborne expressed her disappointment in government and its decision to fire herself and the other members of the board last week.

Osborne said that while she extended best wishes to the newly elected board, led by Dr. Donovan Moxey and Stephen Holowesko, she and other members of the previous board are disappointed not only in their firing but also in the manner in which they were let go.

Last Tuesday, BPL’s entire Board of Directors was asked to resign from their posts effective immediately. Works Minister Desmond Bannister cited a lack of cohesion among the group as the primary reason for their dismissal.

All appointed members of the previous Bahamas Power & Light (“BPL”/“Company”) Board were sought out for their professional expertise and the ability to achieve successes for the Company. The invitation to serve on the BPL Board was accepted with a mandate to improve the Company for the benefit of the Bahamian people. We began the process of revolutionizing the energy sector and lowering the associated costs of electricity to businesses and households across the country.

In pursuit of achieving our mandate, we successfully negotiated and secured interim financing of over $100 Million on behalf of BPL. The interim financing now allows the Company to fund initiatives such as the installation of Advanced Metering Infrastructure (AMI). AMI enables households to better manage their electrical usage and costs. Additionally, AMI, when installed, would also provide valuable feedback to the Company on outages and modernize its handling of customer needs. The financing also provides funding for much-needed plant maintenance, repairs and equipment overhauls.

Recent pronouncements in the press by the Minister of Public Works stating that the Board was “locked in dispute on every critical issue at great cost to the company” are untrue, inaccurate and misleading. This statement does not capture truthfully the root of the real problem encountered by the Board. Interference by the political directorate in a Board whose very existence was chartered to be devoid of such activities stands at the root. Had the Board been left to its own devices without external interferences, the mechanisms in place to prevent gridlock would have been effective. It was the interference that undermined the functionality of the Board and in particular, the leadership of the Chair. Certain factions within the Board were thereby emboldened and allowed to run amok in the Company and willfully ignore the checks and balances which are typically in place for public interest entities. Without the interferences, not only would resolutions to differences have been achieved, but the Board would be left to function in accordance with internationally accepted standards of good corporate governance.

The Board, in particular, the Chair, was continually disrespected and undermined. There are implications of dysfunction attributable to constant personality conflicts and bickering, inability to make decisions, lack of strong leadership and chauvinism. At the very core of the fracture which developed was a difference in viewpoint of the overriding guiding principles. We, three, stood by several guiding principles – best interests of the Bahamian people, accountability, transparency, the rule of law, fiscal responsibility and good corporate governance. Our adherence to these principles led to millions of dollars in savings to BPL and will continue to yield savings and build an infrastructure of transparency and accountability for generations to come. Sadly, our adherence to these principles was not embraced by all.

However, we refused to allow our principles to be ignored. Ironically, it is apparent that we were removed for seeking to ensure that the Board operated in a transparent, fiscally responsible, and ethical manner in the best interests of BPL and the Bahamian people.

Each Board member received a letter formally advising the appointment to the Board. It is wholly inappropriate that we have not been asked to resign or were not otherwise dismissed, in writing. Furthermore, we were only informed about the appointment of the new Board via reports in the media.

One of the exited Board members was not even afforded the courtesy of being advised in person or in writing, prior to the issuance of the Minister’s statement.

We are disappointed that it has come to this. However, we are guided by a quote from Abraham Lincoln: “To sin by silence when they should protest makes cowards of men.”

Truth and integrity have been the guardians of the trust invested in us by our fellow citizens. We simply believe that the Bahamian people should know the truth about our achievements and attempts made to pursue the mandate on their behalf during our tenure as Board members.

Customer satisfaction, service reliability, union relationships, relations with the regulatory agency, and staff morale had started to experience improvements at BPL and then began to deteriorate quickly as interferences intensified. The status-quo is clearly unacceptable.

We extend well wishes to the newly appointed Board and offer the advice to insist that proper corporate structuring, good corporate governance, and ethics must be the order of the day. We make ourselves available for a smooth transition and support the achievement of every possible success in the continuation of the mandate and agenda to improve reliability of supply and customer service at the most affordable rates.