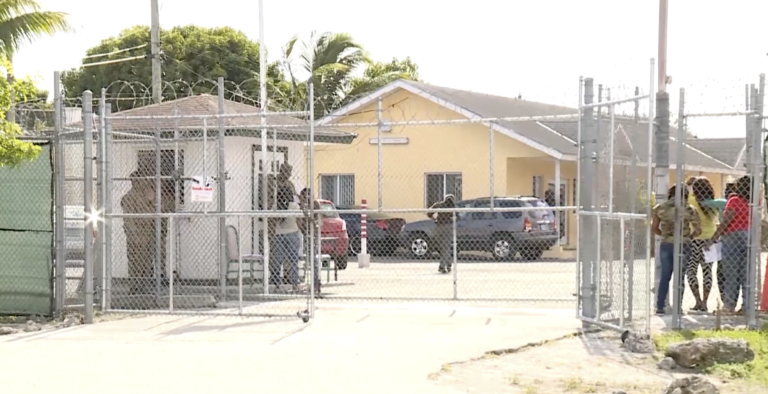 NASSAU, BAHAMAS — Some detainees at the Carmichael Road Detention Center destroyed fencing to mount an escape as tensions rise at the facility over the stalled repatriation process due to COVID-19.

In a statement, the Royal Bahamas Defence Force explained Haitian migrants at the facility launched a hunger strike and demonstrated “belligerent behavior” as they advocated to be returned to their country.

The strike reportedly took place around 8.47am.

The matter was de-escalated; however, the RBDF said a fight broke out between two Haitian men some two hours later.

“Some of the detainees were able to escape the dormitories, destroying several fences and other minor infrastructure in the process,” read the statement.

“The situation was contained, the detainees separated and several of them are expected to be charged with destruction of government property as well as to be placed at Her Majesty’s Correctional Facility.”

The statement added: “Immigration and Police officials are also actively engaged in their respective roles to address the situation. Other migrants currently detained at the Carmichael Road Detention center originate from Colombia, Jamaica, Gambis, Cuba, Sierra Leone and Cameroon.”

The RBDF stated there are currently 85 Haitians at the facility who account for 56 percent of the total population.

The RBDF is responsible for maintaining security at the Carmichael Road Detention Center, whilst the Immigration Department maintains the daily operation and administration of the area.

COMMITTEE ON THE ELIMINATION OF
RACIAL DISCRIMINATION
Sixty-fourth session
23 February-12 March 2004
CONSIDERATION OF REPORTS SUBMITTED BY STATES PARTIES
UNDER ARTICLE 9 OF THE CONVENTION
Concluding observations of the Committee on the
Elimination of Racial Discrimination
BAHAMAS
1. The Committee considered the fifth to fourteenth periodic reports of the Bahamas, due from 1984 to 2002 and submitted as a single document (CERD/C/428/Add.1), at its 1620th and 1621st meetings (CERD/C/SR.1620 and 1621) on 26 and 27 February 2004. At its 1637th meeting, held on 11 March 2004, it adopted the following concluding observations.
A. Introduction
2. The Committee welcomes the periodic report of the State party and the fact that the State party was represented by a high-ranking delegation. It is pleased at the quality of the dialogue it has thus re-established with the Bahamas, and pays tribute to the delegation for having given detailed answers to the many questions put to it.
3. The Committee appreciates the fact that the report, the general form and contents of which are consistent with the Committee’s guidelines, is the result of cooperation between ministries. It does, however, regret that it does not contain sufficient information on the practical application of the Convention.
GE.04-41094 (E) 250504
B. Factors and difficulties impeding the implementation
of the Convention
4. The Committee takes note of the difficulties confronting the State party as a result
of the large influx of migrants and refugees from neighbouring countries, in particular Haiti and Cuba.
C. Positive aspects
5. The Committee welcomes the adoption in 2001 of the Employment Act containing a clause prohibiting racial discrimination.
6. The Committee notes with satisfaction the State party’s commitment to make
every effort to guarantee that migrants can exercise their human rights without
discrimination.
7. The Committee notes with interest the information that a survey of migrants in the Bahamas and their living conditions is shortly to be launched by the International Organization for Migration.
8. The Committee notes with satisfaction that the Office of the United Nations High Commissioner for Refugees and non-governmental organizations have access to the Carmichael Road Detention Centre where undocumented migrants and asylum-seekers are held.
9. The Committee welcomes the State party’s ratification in 1994 of the amendment to article 8, paragraph 6, of the Convention.
D. Matters of concern and recommendations
10. The Committee notes with concern the reservations to the Convention entered by the State party, in particular the vague and general statement that the State party will not accept obligations going beyond constitutional limits or the obligation to introduce a judicial process beyond those prescribed under the Constitution.
The Committee encourages the State party to consider withdrawing all the reservations it entered upon acceding to the Convention.
11. The Committee notes that the State party has no precise figures on the ethnic composition of the population, and points out that such information is necessary to assess how the Convention is being applied in practice.
The Committee invites the State party to include more detailed questions in the population census so as to get a better idea of the ethnic composition of the country, and draws the State party’s attention to paragraph 8 of its general guidelines on the form and contents of reports.