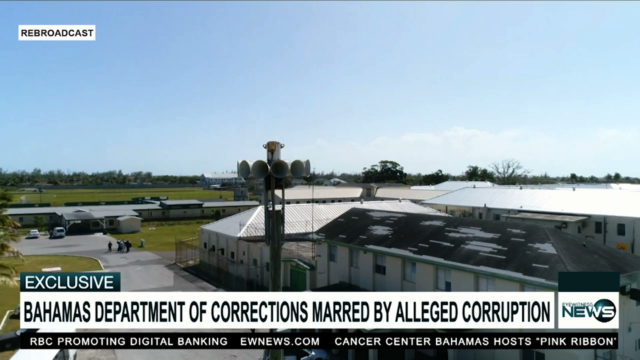 Reports of alleged victimization, scare tactics, unreported escape attempts, poor treatment, bullying and sexual harassment are just some of the complaints levied upon the top brass at the Bahamas Department of Corrections.

Officers at the facility said they are fed up and have had enough.

Officers were led to speak to Eyewitness News on Thursday after the inhumane conditions at the Bahamas Department of Corrections were exposed in an exclusive “Sentence to Suffer” documentary which aired last month.

The documentary, which attracted thousands of viewers, unveiled the horrifying and less than humane conditions at the prison. It also featured the candid views of officers and inmates.

Presently, the spotlight continues to shine on the once penal facility as officers, who spoke on the condition of anonymity, made some disturbing claims.

Officers gave a raw and open account of the negative treatment that they must endure at the correctional facility, some saying that they have also received threats and are fearful of losing their job.

Meanwhile the Department of Corrections has recently changed leadership.

Commissioner Patrick Wright retired earlier this year and was replaced by Charles Murphy who headed the Maximum-Security Unit.

Officers who spoke to Eyewitness News revealed that during a recent visit to the prison by the Permanent Secretary, the alleged insecurities displayed by a top executive had no boundaries.

Officers claimed that the top executive reportedly failed in bringing to the permanent secretary’s attention important matters concerning the prison, and the executive was reportedly afraid to allow an interaction to take place between the Permanent Secretary and a Consultant, who would have confirmed the victimization reports as well as other claims.

Officers further claimed that other high-ranking officers reportedly engage in scare tactics to silence them from speaking on certain matters. They alleged that complaints could go as far as to the human resources department in an effort to silence officers.

Eyewitness News understands that a consistent effort has been in place over the years – with the appointed leadership – to allegedly undermine and hinder progression of low-ranking officers at the facility.

Further probing by EWN also revealed that during a recent attempted escape at the Maximum Security Housing Unit, inmates were digging a hole in the jail roof that took them a few months.

The Officers claimed that despite all the chipping and moving of debris, the senior ranking officer at the time that this was taking place, nor the designated go-to officers, were competent enough to recognize what was happening. Officers said they believe the move was a deliberate attempt to ignore what was happening.

What’s more, reports have also surfaced that senior and regular ranking officers may be involved in the alleged criminal world at the facility.

There are also accusations and reports of poor treatment and bullying of inmates.

One inmate said an officer commonly referred to as “da boss of the back yard” was remembered and known for tying up an inmate and beating him as a means of correction. They said when other officers attempted to say something, there was further intimidation.

There have also been reports of gang affiliation.

Officers have suggested that inmates get their information and any other needs taken cared of by these “corrupt officers” of which one officer in particular is known as a star trafficker.

“We’re told this senior officer uses his status and rank to push drugs, cellphones, food, favours – basically whatever is requested by inmates into the prison.”

There are other reports of officers who are reportedly importing vehicles, using the inmates for free labour and selling jail products to the public.

Eyewitness News also received complaints of food going missing from the prison’s kitchen, although a detailed work flow has been implemented to keep stock. It was claimed that an individual would reportedly come to work with their shopping list at 4a.m. and leave the grounds with goods. It is understood, however, that this breech occurred under a different leader.

Lastly, there were also allegations of sexual harassment involving a senior male officer with female officers in an area known as “the upper room”.

Meanwhile morale at the prison is said to be at an all-time low, and officers are uncomfortable with what is going on and the lack of direction.

According to officers, the place is a “ticking time bomb”.