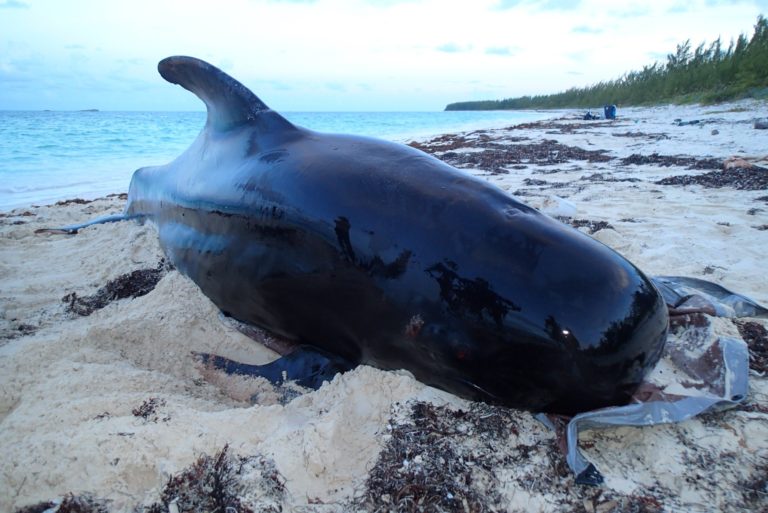 There are conflicting views over what caused the recent death of a beached whale in Abaco. While marine conservationists suspect that a human predator savagely cut the whale in search of ambergris – a substance produced in the stomachs of sperm whales that is one of the most valuable raw materials in perfumery – commercial fishermen, on the other hand, believe natural predation may be what led to the mammal’s death.

The giant marine mammal died after beaching itself just north of Crossing Rocks, despite a 2-day effort to save it by members of the Abaco-based non-profit Bahamas Marine Mammal Research Organization (BMMRO) and volunteers.

According to BMMRO’s scientist Dr. Diane Claridge, the location of the cut on the whale’s underside suggested that whoever cut the creature was looking for ambergris.  In perfumes, ambergris is used as a fixative and its presence can be best described as marine, animalic and sweet. The fragrance exuded by ambergris is as rare as the substance itself.

If indeed the whale’s death was caused by a person in search of ambergris, the perpetrator was not well informed.  Ambergris is sometimes defecated or vomited by some species of whale (never pilot whales like the one that was killed), and it is only valuable when it has been floating naturally in the ocean for some time.

In a statement, Bahamas Reef Environment Education Foundation (BREEF) Executive Director, Casuarina McKinney-Lambert told Eyewitness News that whales and all marine mammals are protected in Bahamian waters and this intentional attack resulting in the death of a young female pilot whale is appalling.  While she and other marine conservationists are convinced that humans are responsible for the whale’s death, Bahamas Commercial Fishers Alliance President Adrian LaRoda thinks otherwise.

In a statement sent to Eyewitness News, LaRoda said he doesn’t see how they would believe someone would cut open a live whale and the animal would still be alive, and they “wasting time” trying to save it.  Amidst reports that sharks were seen circling the injured whale, LaRoda suggested that it is possible that the sharks were chasing the whale and it went into shallow water over sharp coral and got injured.

“It is most likely natural predation or more plausibly, a breach on a shoal or something,” LaRoda wrote.

However, Dr. Claridge said there is absolutely no doubt that a knife was deliberately used to make the laceration because the cut was too straight to have been caused by rocks or coral, and the skin and blubber are not easily cut into.  For these reasons, she believes it had to be done with some force.

Bahamas National Trust’s (BNT) Executive Director, Eric Carey is reserving comment until he has had an opportunity to obtain more information surrounding the matter.