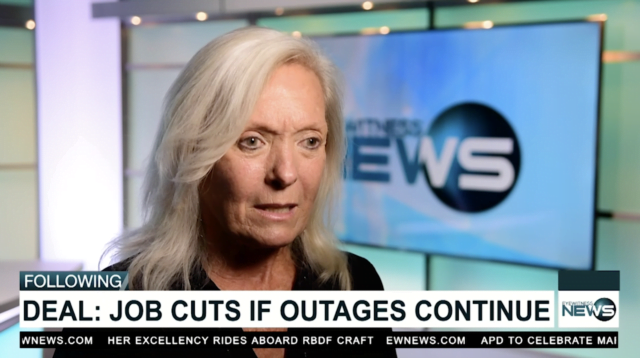 NASSAU, BAHAMAS – Chairperson of the Environment and Energy Committee for The Bahamas Chamber of Commerce, Debbie Deal, said yesterday that businesses may be forced to take drastic measures, including job cuts, if power outages continue.

“It’s a difficult time for us as a country,” Deal told Eyewitness News Online.

“For business, this is rough. BPL is our only energy company. Our prices are high and outages are constant.

“A lot of business persons will soon consider paying their electricity bills with inconsistent service or let go of staff,” Deal said.

Her comments came following a series of rolling blackouts over the weekend experienced by Bahamas Power and Light (BPL) consumers in the capital.

BPL, in a string of releases on the situation, said that they encountered challenges with its Blue Hills Power Plant. Officials added that scheduled load shedding could not commence due to a “trip” in the system.

Nevertheless, the outages inconvenienced thousands and according to Deal, businesses are suffering the most as a result.

“The downtown business community is really having a tough time,” said Deal. “When downtown goes out, [Bahamas] Customs goes out and when that happens, you can’t clear your goods, you can’t do anything and it has a trickle-down effect.  It’s really a challenge and we need to do something about it.”

BPL is in the process of securing and installing new generators that are expected to stabilize electricity generation until a new LNG power plant is constructed. And while this is considered a long term goal, Deal stressed that something must be done immediately.

“This is going to be a very long summer and if this continues we should at least be able to get specifics on the outages so we know that there is a schedule in place that we have to work around,” she said.