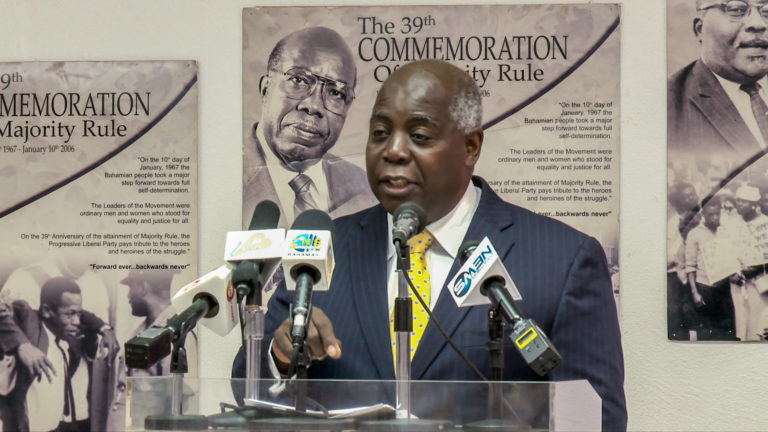 Opposition leader Philip Davis in the House of Assembly (HOA) Thursday goaded the government saying, it has truly done nothing to grow this economy and that what the Free National Movement (FNM) calls “successes”, should all be credited to the Progressive Liberal Party (PLP).

Davis detailed accomplishments of the former government began and completed before the Minnis administration came into power, and boasted that when the PLP was in power, it was “the best of times”.

“One could reasonably argue that we were at the brink of the best of times when in 2017, the PLP was booted from office,” Davis said.

“By that time, notwithstanding the travails of (hurricanes) Joaquin and Matthew, we had been able to arrest the challenges of revenue growth which we met in 2012.

“…we were able to do so because, after extensive policy reviews and extensive consultations with stakeholders in the private sector and with civil society, we were able to successfully introduce value-added tax (VAT) at 7.5 per cent. It was not viewed as the best form of taxation, but it was something the Bahamian people could reasonably live with.”

Davis made note that not only did the PLP introduce VAT in order to address the revenue challenges, but also embarked on the most ambitious revenue enhancement efforts in the country’s history.

“We also introduced a new real property tax system, which allows for computer-assisted mass appraisals and the online acceptance of real property tax payments; we were recognised and applauded for having the first completely paperless VAT system in the Caribbean,” he said.

“It was the best of times or it was on the horizon as unemployment was trending down and we could look forward to a further enhancement of the labour markets brought about by the opening of Baha Mar – providing direct employment for over 5,000 persons with related spin-offs in the labour market.

“It was the best of times – the National Health Insurance (NHI) was being rolled out; BAMSI (Bahamas Agriculture and Marine Science Institute) was fully operational and its impact on reducing food cost and providing fresh food for Bahamian families was being felt, especially to those who live in New Providence.

“The University of the Bahamas (UB) had just been inaugurated as a full-fledged autonomous degree granting institution with a path to much future growth.

“The National Training Agency (NTA) was beginning to bridge that very important skills gap that so many young people needed to find sustainable work.

“It was the best of times.

“In a little over a year’s time, a little over twelve months, we have descended into the worst of times,” the opposition leader said.

Without notice and without consultation, this people’s time government has increased VAT to 12 per cent – a whopping 60 per cent and cannot credibly explain why it has to do so.”