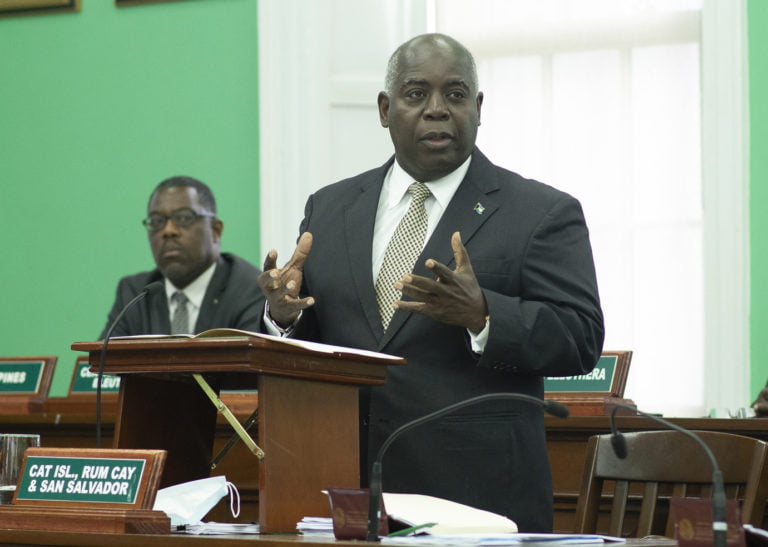 NASSAU, BAHAMAS — Progressive Liberal Party (PLP) Leader Philip Brave Davis said last night that if the PLP is successful in becoming the next government, he will ensure as prime minister that members of his government do not have controversial contracts or “dealings” with government entities or consequences.

“In my administration, I will assure and ensure that none of my; not only members of Cabinet, but no one who is elected in my team will have any dealings or contract or relationship with a government entity that could produce controversy,” said Davis, who appeared as a guest on ILTV’s ‘Beyond the Headlines’ with host Clint Watson.

“Let me put in this way, it may be easier said than done, but if it is done, the person who does it knows what will happen and it will happen immediately.”

Asked whether the PLPs chances at the polls could be harmed because of Davis’ links to the rejected Christie administration, the PLP leader said he is not ashamed to have served as a Cabinet minister in that administration.

“Let me just say that the Christie administration did what they thought was best,” Davis said.

“The priorities and choices made were what they thought and I thought was best at that time.

“The label of being corrupt I reject and reject [outright] because I am not aware of any of my colleagues in that Cabinet committing any corrupt act.

“I understand the mudslinging in the thrust of the campaign and the [untruths] told by this present administration to succeed in persuading the Bahamian to vote for them.

“That was understood, but I don’t also believe that my association with the previous administration will impact my electability at all.

Davis said he accepts there remains some cynicism among the electorate concerning the political parties, but suggested this was largely because “they appreciate that for far too long the country seems to have been stuck.”

However, Davis said he is prepared to lead and move the country forward.

He expressed concern about what he called stalled social mobility in The Bahamas.

The PLP leader said he wishes to remove obstacles that stand in the way of “the ordinary Bahamian who could go somewhere, but there is an obstacle in the way”.

He said: “The time has come for someone with a vision like I have to ensure that we distribute not just the wealth, but the esteem to those who are amongst us who deserve it like our frontline nurses; like our frontline workers; and those who for example don’t have a degree.

“We need to, as it has been said somewhere, remove the myth of meritocracy and appreciate that our people require a hand up.

“And that hand up has to come from somewhere, inspired by a political directorate, [that] has concern for, care for and empathizes with those amongst us who are vulnerable and needs that hand up.”

In the lead up to the last general election, the Free National Movement’s campaign focused heavily on the alleged corruption of the Christie administration a numerous controversial mattering surrounding PLPs.

The FNM continues to paint the PLP as a corrupt group.

In February, Prime Minister Dr Prime Minister made the case that the ongoing lawsuit alleging Canadian fashion designer Peter Nygard engaged in illicit acts with underage Bahamian girls and his ties to the PLP, was another reason to keep the official opposition out of office.

Why should the bahamian people vote for the plp who disrepected all bahamians when they voted no to the number houses that continue to destroy the poor people. If you remember pindling stopped gambling because it was hurting bahamian. Whats so exciting in there why youll dont give up. Why dont you retire and let some one new get there then the plp might win but not with you

He’s the most corrupt one if ya ask mev

He’s the most corrupt one if ya ask me

I did not realize that any adult in this country was being forced to gamble. At some point as an adult everyone has to take personal responsibility for themselves. Minors are the ones that the law should protect in this regard. We all have choices in life. There are and always be adults that make poor decisions. I personally don’t gamble but on issue with the adult that chooses to do so. As far as corrupt politicians that’s will have to be seen.

Dont be retarted ya yll crying for no lock downs curfew loosing jobs people hungry n have to swallow the lil bit a pride they gat n get a$20 slips to put good on the ground for their kids persons getting evicted banks taking people homes bpl shooting of lights . Water n sewage cutting water. People frustrated killing children now need I go on? Ok great let’s talk about the taking away of your beaches but foriegn persons come to fart piss on your sand while your retarded arz looking through your bars window you get this government burrowing like it’s no tomorrow becsuse they know it’s people like you who would say oooh they had to burrow n make stupid deals to do wa align their pockets not yours. Man dont make me go on n u talking disrespect? From saying no to numbers? You gatta be stupid. Piss me off

Brave Davis got corruption running through his veins

Just hilarious! This man sat there and watched for 5 years! Not a crack from him! Davis, impress me – call them out (past and present) now while you are not PM!