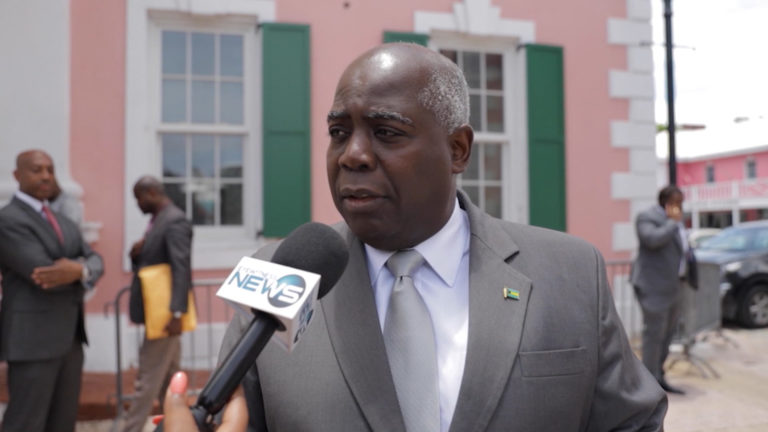 NASSAU, BAHAMAS — Opposition Leader Philip Brave Davis said Prime Minister Dr Hubert Minnis should not blame the Progressive Liberal Party (PLP) for a controversial oil drilling deal, but should instead “accept responsibility for his own decisions”.

Davis’ comments, made in a statement released Friday, follow the prime minister telling the media he remained “totally against” the spud of an exploratory well set to begin as early as Tuesday of this week.

On the sidelines of a Crown Land grant ceremony on Abaco, Minnis suggested he would have backed out of the deal with Bahamas Petroleum Company (BPC) “if we could have gotten out of it”.

But Davis said: “The prime minister has surely lost it. In distancing himself from oil drilling in the wake of the drilling rights issued to the Bahamas Petroleum Company — a license he incidentally approved — his disingenuous words came off as the aimless ramblings of a nincompoop.

“The prime minister told the media that he was totally opposed to oil drilling during a campaign swing in Abaco earlier today. Nobody believes him and his comments have attracted sharp criticism, laughter, jeers and even ridicule on social media and around the water coolers.”

He added: “The record clearly shows that upon coming to office in May, 2017, the FNM (Free National Movement) government knew that a condition of the license was that BPC had to drill by April 2017 and the delay was caused by the insistence of the PLP that the environmental safeguards in new legislation be put in place.

“The incoming Minnis administration reviewed the matter and decided to proceed… So, do not blame the PLP. He must accept responsibility for his own decisions.”

BPC was initially awarded five licenses by the PLP Christie administration more than a decade ago in 2006.

Davis has claimed that the deal was reworked between 2007 and 2012 under the FNM administration.

The deal has attracted local and international attention, with environmentalists calling for the oil drilling to be stopped. Environmental groups Waterkeeper Bahamas Limited and Coalition to Protect Clifton Bay last Tuesday filed an application to bring judicial review proceedings against the decision to approve exploratory oil drilling, a move which BPC CEO Simon Potter dismissed as “without merit”.

Minnis on Friday said it is “not his dream” to drill for oil in The Bahamas, adding that he envisioned another outcome that would see the formation of a joint plan to establish protected marine areas in-country, supported by the United Nations.

However, Davis pointed to the now seemingly dormant deal for an oil refinery on Grand Bahama that the Minnis administration signed with Oban Energies in 2017 and suggested it means Minnis “has no issue with oil”.

“He (Minnis) signed the failed multibillion-dollar Oban oil storage, refining, transshipment and distribution deal so he obviously has no issue with oil,” Davis claimed.

The government signed the agreement with Oban in February 2017 for a $5.5 billion oil refinery and storage facility project in East Grand Bahama.

It did so in the absence of an environmental impact assessment (EIA), which was just one of the controversial elements of the deal, heavily lamented by environmentalists.

There was also widespread public outcry over a clause in the agreement that prevented the government from scrapping the deal based on anything in the EIA.

After months of pushback, Minnis, at the time, admitted his administration made missteps with the deal in its haste to boost Grand Bahama’s economy.

Nearly three years since that agreement was signed, at last report at the beginning of this year it was still under review by a Cabinet committee.

Davis’ statement continued: “All the prime minister was doing was pandering to his political quacks in that phony Save The Bays organization because he thinks that is the popular thing to do.

“In the process, the prime minister’s credibility and integrity continue to take a vicious public beating due to his habitual duplicity and hypocrisy on any number of national issues. He must follow the law and not play the blame game.”

Well I certainly hope they drill. It’s good news for us – but must be done safely.