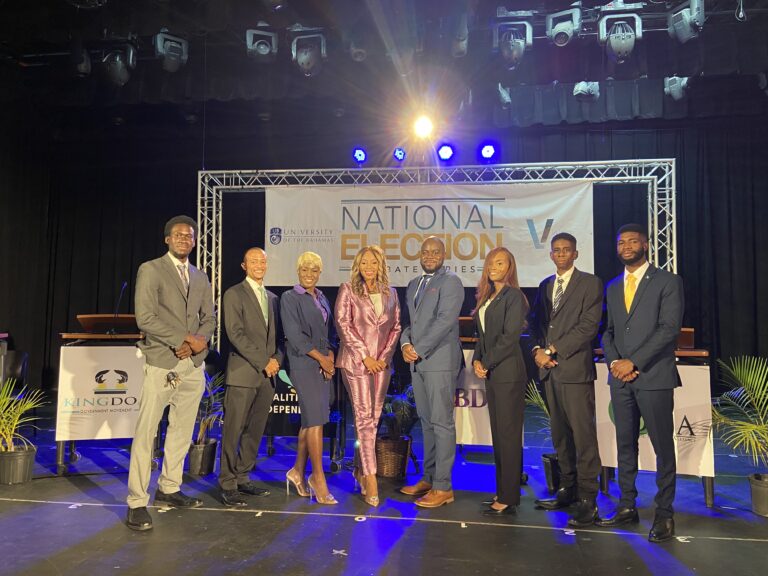 Participants and moderators of the first ever national youth debate hosted by the University of The Bahamas and Verizon Media Group on Tuesday, May 11, 2021. (FILE PHOTO)

The first installment of the four-part debate series, which is being hosted in collaboration with The University of The Bahamas (UB) and Verizon Media Group, was a youth debate with representatives from six political bodies seeking to vie for office in the upcoming general election.

The debaters responded to national issues ranging from education and brain drain to economic development, mental health, prison incarceration and recidivism, among other key topics.

Davis was among the attendees of the live viewing of the debate at the Performing Arts Centre on the university’s campus.

“Multiple parties sent representatives to the youth debate sponsored by the University of The Bahamas tonight, to share ideas and debate policies important to the Bahamian people,” he said.

“I congratulate Justin Smith, who was passionate and articulate in sharing the PLP’s Economic Plan, which is a road map not just out of the current economic crisis but a vision for a more dynamic and more inclusive economy.

“Justin Smith is an admirable representative of a new generation of young progressives who bring energy and brilliance to our party and to our country.”

The PLP also took the opportunity to once again criticize the governing party for its decision to not take part in the event.

The FNM has admitted that it initially agreed to participate in the debate series and sent the name of a debater to event organizers.

However, after consideration from the party’s leadership, the party ultimately decided not to participate, citing several reasons and concerns.

Davis said: “The FNM’s failure to participate is evidence of their contempt for the Bahamian people. It’s not more complicated than that.”

The event was co-moderated by Anastarcia Palacious, host of Bahamas At Sunrise, and Shelby McPhee, UB professor and political science analyst.