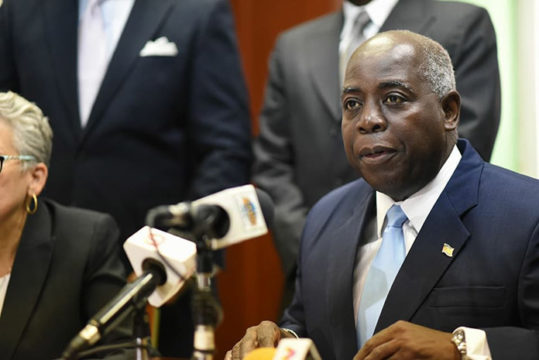 Opposition Leader Philip Davis berated the government for increasing taxes and blasted it for making rash decisions with the country’s finances.

In a statement released Monday, Davis said, it was clear that last week’s budget communication was “a disaster filled with inconsistencies, rash decision making, unsubstantiated claims and questionable projections”.

“The budget was evidence of incompetence and failure of the Ministry of Finance. It is nothing more than poor management, especially when you take a closer look at the numbers and the unjustifiable amounts borrowed over the past fiscal year,” Davis said.

Stressing that the government failed to collect revenues and properly manage the economy while blindsiding the country with a value-added tax (VAT) increase to 12 per cent, Davis said the government was playing a “dangerous game”.

According to Davis, noted local economists, financial experts, past ministers of finance and the business community, including many ardent Free National Movement (FNM) supporters, have all concluded that the new increase is a mistake.

“Most alarming,” he said, “is the government’s failure to consult and the dictatorial saddling of the economy with major tax increases with three to four weeks to adjust. This is impractical and demonstrates no appreciation for the way the private sector works.”

“Who is advising the Ministry of Finance? What about contracts of hotels and the existing inventory of wholesalers and retailers?”

“The budget that we saw last week will not and cannot be the final budget. There will be further changes and concessions particularly in the tourism sector,” he said.

Davis said the opposition is also concerned about the effects of the imposition of the five per cent stamp tax on deposits and withdrawals at gaming houses.

“This will adversely affect many persons in the Family Islands who, in the face of the collapse of banking services in their communities, rely on these accounts to receive cash transfers from families and friends,” he said.

“Instead of dealing with the return of banking services in the Family Islands, the FNM government proposes to tax the poor for their own.

“Is this budget really about accountability in public finance or about free rides to special interests, while the Bahamian worker carries the burden?

“How do we explain the limited funds for the Auditor General while still not advising the public on the huge lump sums paid to Ernst & Young for political audits, or to foreign Queen’s Counsels in feeble attempts to score political points?”