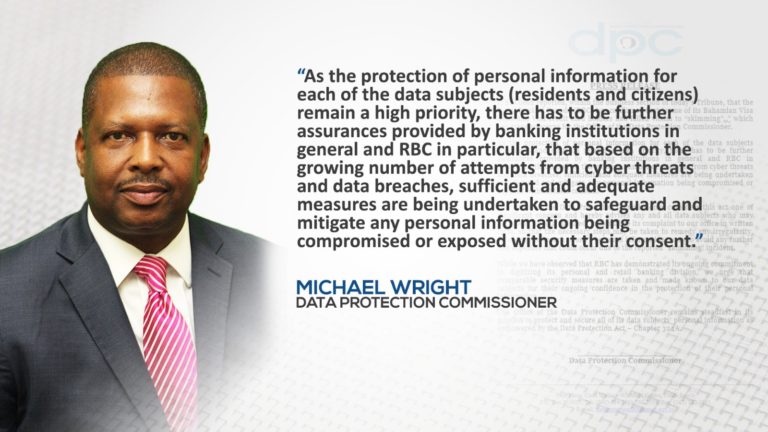 Data Protection Commissioner Michale Wright said this week that he is also investigating the recent automated teller machine (ATM) scam at Royal Bank of Canada and has since urged those who may have been affected to file an official complaint with his office.

Commissioner Wright, in a statement released Wednesday said that as the protection of personal information remains a high priority for his office, there has to be further assurances by banking institutions that sufficient and adequate measures are being undertaken to safeguard and mitigate any personal information being compromised or exposed without their consent.

Read the full statement below:

As the protection of personal information for each of the data subjects (residents and citizens) remain a high priority, there has to be further assurances provided by banking institutions in general and RBC in particular, that based on the growing number of attempts from cyber threats and data breaches, sufficient and adequate measures are being undertaken to safeguard and mitigate any personal information being compromised or exposed without their consent.

The Office of the Data Protection Commissioner considers this act one of significant concern and hereby advises any and all data subjects who may have been directly affected, to formalize its complaint to our office in written form, so that the necessary steps may be taken to remedy any irregularity, involving the breach of one’s personal information, so as to avoid any further risk exposure that could occur due to the reported “skimming” incident.

While we have observed that RBC has demonstrated its ongoing commitment to digitizing its personal and retail banking division, we urge that comparable security measures are taken and made known to our data subjects for their ongoing confidence in the protection of their personal information.

With all due respect and with the understanding that the laws are sugnificsigni less than they ought to be, one would have thought the banks regulator, the Central Bank of The Bahamas would have had a definitive statement. This sort of attack has the potential of ubdermiunde the Financial Sector. More needs to be done.