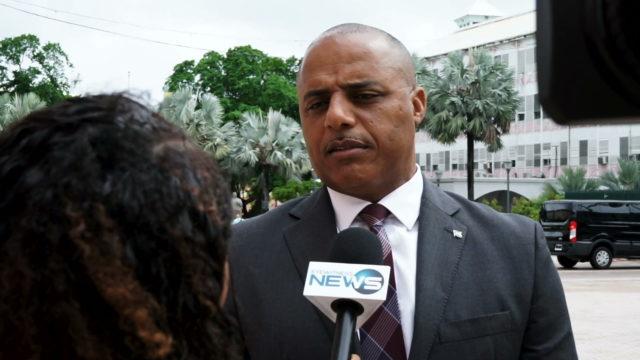 NASSAU, BAHAMAS – Security at all government buildings will be significantly improved, according to National Security Minister Marvin Dames, who admitted that the recent shooting death of a Defence Force Officer on the grounds of Government House has exposed weaknesses in the current system.

“I have a team working to create a policy for government buildings, to ensure they are secure,” Dames told the media on Tuesday.

“We will bring the requisite security that is needed to protect these buildings to the forefront. They have not yet completed their work, but it should be completed shortly.”

Earlier this week on Sunday, Philip Perpall, a 52-year-old Royal Bahamas Defence Force Petty Officer met his demise after he was shot while stationed at the Guard House of Government House, home of the country’s head of state, the governor general.

Yesterday, Dames said the Defence Force is responsible for the security of all government buildings and he has directed the Commodore to immediately do an assessment of key government structures throughout the country, and to apply the resources needed.

He said an independent team of investigators has also been assigned.

“They will look at the practices, procedures and protocols,” Dames said. “They will look to see why it happened and when it happened, was anyone responsible for it happening and what we need to do in the short term to address any issues.”

In response to criticisms from the opposition that a change in policy may have led to the murder, Dames said the Progressive liberal Party (PLP) should be the last to comment.

“Last time I checked, they were the government about two years ago, what have they done?” he asked.

“[The] leader of the Opposition is now an expert, but two years ago they had  the highest crime rate in history so he should not be trying to give advice right now.”

Meanwhile, Dames confirmed that the investigation into the shooting death of Perpall is progressing.