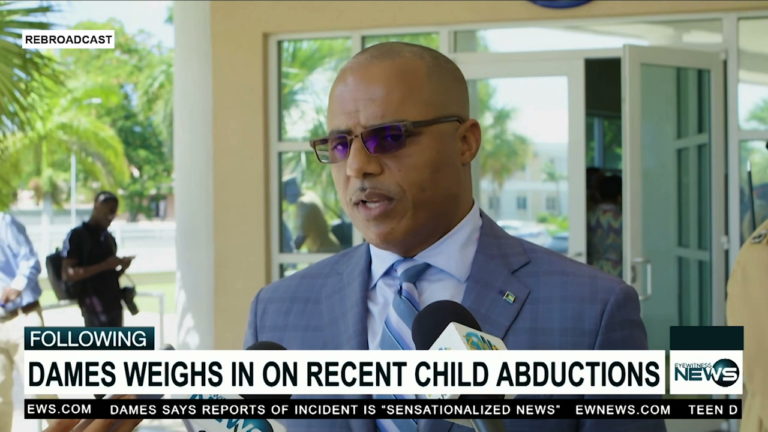 NASSAU, BAHAMAS – With two child abductions reported in the span of two weeks, many have criticized the government on social media for dragging its feet to implement the proposed Marco Alert System.

On Monday, National Security Minister Marvin Dames told Eyewitness News Online that it will take more than a Marco Alert mobile app to address the issues that the country is presently facing.

“Often times we get caught up in this business that it [social issues] requires a police response,” Dames said.

“We’re taking a multifaceted approach to these issues and we have been introducing the other initiates to work hand-in-hand to address the issues of crime and to address the social issues that are impacting this country in a very very, very negative way.

“But the police are investigating it [child abductions] and they are pursuing some avenues in respect to it, and so we all would like to see things happen immediately, but there is a process.”

The MARCO alert system was launched last July 2018, to streamline the activation of urgent bulletins in serious child abduction cases.

It was expected to mimic the AMBER alert system in the United States. However, in order to receive these alerts, members of the public had to sign up.

Last week, Dames told the media that his ministry has concluded its testing of the Marco Alert System, to ensure that they address issues with the system itself and the government is now preparing a proposal to present to Cabinet.

On Sunday, March 3, shortly after 2:00 a.m., a man entered a home off Wilton Street and abducted a six-year-old girl. In less than an hour; police said the child was discovered walking in the area of Woodlawn Gardens by a passerby and taken to the Wulff Road Police Station.

On Monday, Eyewitness News spoke to the family of the six-year-old who alleged that the child was sexually molested.

Police initially reported that a male was presently in custody for questioning, but as of Monday, police updated that the young man was released.

On February 16, 2019, three-year-old Shavard Bain was also allegedly abducted while he was riding his bicycle in the area of South Beach Estates.

Bain, however, was dropped off the following day on Feb. 17 at a laundromat on Joe Farrington Road. Police reported that he was not harmed.

To date, no arrests have been made in connection with this matter.