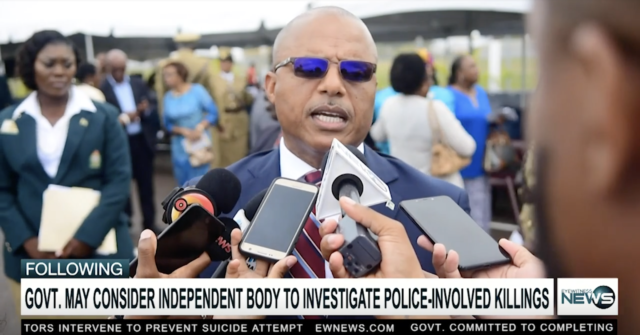 NASSAU, BAHAMAS – National Security Minister Marvin Dames revealed on Monday that there is a possibility that government may look into the idea of establishing an independent body to investigate incidents of police-involved killings.

Farquharson-Seymour’s comments were made following a decision handed down by the Coroner’s Court, which indicated that a detective constable was unlawful in the shooting death of a civilian during a heated foot chase in Nassau Village on November 30th, 2018.

Eyewitness News Online questioned Royal Bahamas Police Force Commissioner Anthony Ferguson as to whether or not he would consider the idea.

The commissioner said that he is confident in the current practices of the police force, which allows police officers to investigate matters involving colleague officers.

He noted, however, that the decision would have to come from parliament.

On Monday, the same question was fielded to the national security minister who did not shrug off the idea.

“We continue to look at the process and see how we can improve on it,” he said.

“That is something that we are doing as well in respect to investigation of these matters.”

The national security minister asserted that transparency is at the top of his agenda for all law enforcement agencies.

“We are looking at every means and ways to bring about a greater level of transparency in everything that we do,” Dames said.

“It’s a process. It’s not something that will happen overnight. You won’t see the change overnight; but, it is our goal to ensure that transparency is the order of the day for all of our law enforcement agencies.

“No one is above the law and that is why we have laws in place that when people do commit offences, whether it’s police officers, defence force officers, customs officers or correctional officers, that there are consequences for that.”