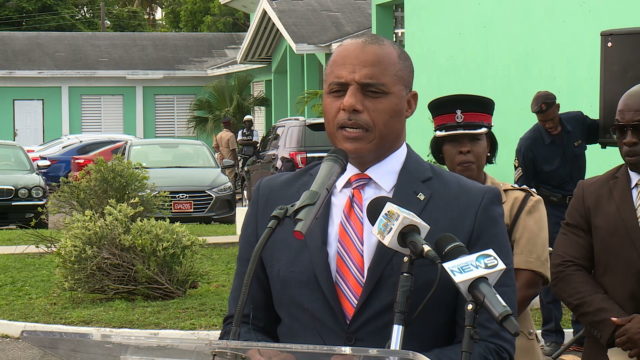 National Security Minister Marvin Dames fired back at Progressive Liberal Party (PLP) Leader Phillip Davis who accused him of abusing his power in promoting an officer of the Royal Bahamas Police Force (RBPF), saying there was nothing untoward about the promotion.

Davis made the allegations at a PLP public meeting Wednesday night and claimed that following the damning audit of the RBPF – which revealed that promotions were arbitrarily handed out to officers – Dames approved a force order for an officer to be promoted from Inspector to Assistant Superintendent, retroactive 2014.

Dames, however, said the approval was given under the former administration but the process was never completed.

“This is absurd and if Mr. Davis did his homework – because (this promotion) was a part of the previous government – he ought to have known that the officer in question was in an acting role a long time, and was away in school completing a doctorate degree while serving in the police force and could not have been confirmed,” Dames said.

He added that this all took place before the Free National Movement (FNM) was elected to office.

“I agreed that she should have been confirmed as leader, we should not go about spreading untruths … we conducted an audit and discovered it was top heavy, because they (PLP) wanted to promote officers right before an election … but no one wants to talk about that,” he said.

The national security minister said he sees nothing wrong with the promotion of the officer in question and said his office simply followed through on a process that had already started under the former administration.