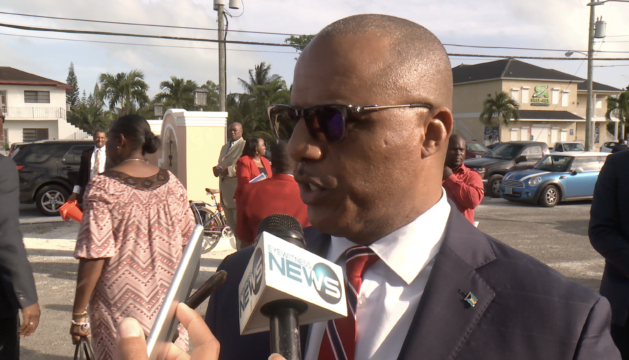 NASSAU, BAHAMAS – Minister of National Security Marvin Dames was unable to answer questions fielded by media on Sunday, which sought to understand whether or not government made a blunder when it suggested that the opposition has been consulted in its appointment of Paul Rolle as the new acting deputy police commissioner.

The Royal Bahamas Police Force (RBPF) announced Thursday night that Rolle was selected as the acting Deputy Commissioner of Police.

He serves in that capacity as the current deputy commissioner, Emmerick Seymour, is currently on vacation leave.

On the heels of last Thursday’s announcement, the opposition released a press statement on Friday to note that there was no consultation between themselves and government about the appointment.

“Please be advised that no one consulted me at any time on this appointment,” said PLP leader Philip Brave Davis.

Government did not respond to the PLP’s statement on Friday.

And while Dames did not confirm nor deny if government made a blunder in its public statement about the appointment of Rolle to his new post; he noted that when the time comes for the opposition to be consulted; government will seek their consultation.

“When the time comes for a substantive post, then that is a different story,” Dames asserted.

“There is nothing in law that says that the leader of the opposition needs to be updated [on an acting post].”

Seymour was sent on immediate vacation leave last month in an exercise which government claims will be carried out across the public sector to ensure that the public purse is not burdened with exorbitant payouts at the time of retirement.

Seymour was listed among almost one dozen fellow top-ranking officers who were placed on immediate vacation leave last month.

While the opposition labeled the move as political victimization, government said it is in the process of streamlining the public sector to ensure upward mobility and efficiency.