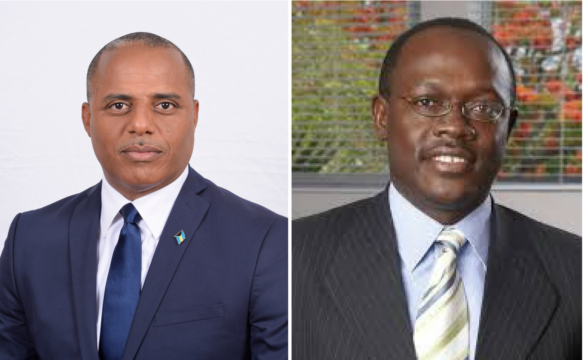 In this compilation photo from left: Minister of National Security Marvin Dames and Deputy Leader of the Progressive Liberal Party (PLP) Chester Cooper.

Prime Minister Dr. Hubert Minnis warned Monday during an interview with reporters, that Cooper should “be careful” after suggesting Dr. Minnis should resign over “misleading” the country on the $5.5 million Oban Energies project.

In responding to Cooper’s claims of reaching out to police, Dames said, he won’t get involved in police investigations.

“He’s a citizen he can make a complaint if he wants, I don’t control that.”

But when asked if he thought the complaint was simply politics, Dames said, “I don’t know … the full extent of his complaint.

“One of the things I try to do as a neophyte in this business is to rise above the fray of political antics and movie cuts. It’s nonsense and the Bahamian people are sick and tired of it.

“It’s time for all of us as politicians – no matter which side we sit – to get to business and to do the peoples work. I hope he’s not wasting the police time, because police have more pressing issues to deal with.”

During an interview with press, Dr. Minnis in responding to questions surrounding Cooper said, “The only thing I did not do was tell ya’ll that it was a ceremony at that particular time. The only thing I say to Chester cooper is, be careful.”

The oil refinery and storage facility development set for Grand Bahama was clouded by controversy, particularly by what had appeared to be a fake signing of the project’s head of agreement (HOA) by Oban’s then non-executive chairman Peter Krieger, who signed someone else’s name on the contract.

At the time, Dr. Minnis said, the signing was simply ceremonial.