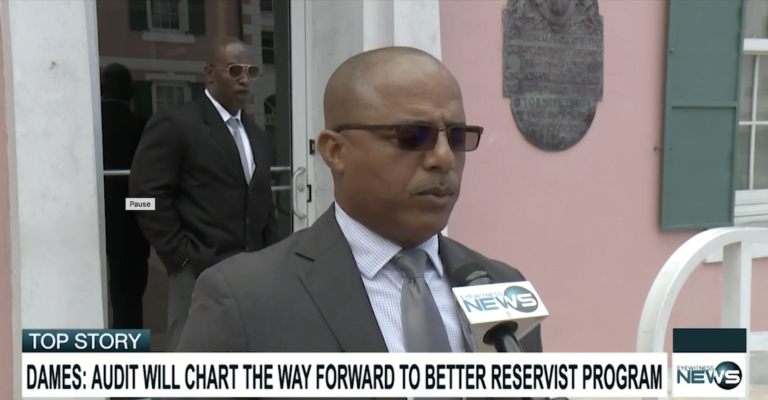 NASSAU, BAHAMAS- Minister of National Security Marvin Dames said yesterday that the damning audit into the Royal Bahamas Police Force (RBPF) Reserves Branch is not an indictment on the reserves that serve, but a road map to correct the discrepancies and long-standing challenges within the system made by successive governments.

“There are committed officers, who are actually worki­ng and giving their best,” Dames said Eyewitness News Online outside the House of Assembly.

“What some of what you are seeing is how the department has been operating for many years and we have to move it to a place to recruit based on needs.”The audit detailed that for more than ten years reserves have been allowed to work up to 150 hours per month, and in any given year, 1,800 hours, up 837 percent from the allotted hours provided by the Police Act.

The Police Act stipulates reserves were required to work an average of four hours per week throughout the year, with an entitlement of four weeks’ vacation per year; and no reserve officer should engage in police duties for more than eight hours a day except where found necessary.

It was also revealed that officers submitted times and were paid for hours they never worked. When asked if anyone would be held accountable Dames suggested that this was not necessarily the goal of the audit.

Yesterday, Dames said, “We believe in evidence-based work that is always the basis before we decide to invest or waste money. We want to know upfront what we are dealing with. What are some of the issues and the corrective measures that we can apply to bring it in line? That is what it’s all about.”

Dames added that other agencies under the Ministry of National Security, including the Bahamas Department of Corrections and the Royal Bahamas Defense Force will also be subject to similar audits.

“If we want to perform at the highest level, we have to demonstrate that in the way we