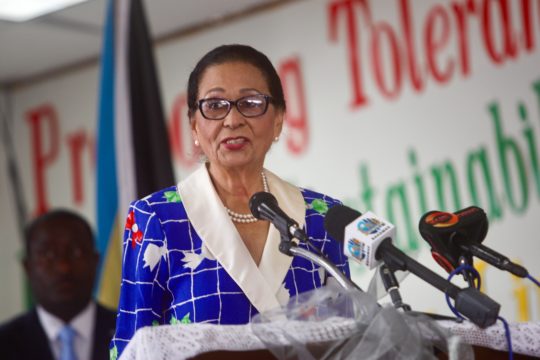 Says differences can be expressed without being divisive

NASSAU, BAHAMAS – Speaking at a farewell ceremony held in her honor at Mt. Fitzwilliam on Thursday evening,  Governor General Her Excellency the Most Hon. Dame Marguerite Pindling urged Bahamians to resolve differences and set aside divisiveness and discord.

Dame Marguerite has served as governor general for the past  five years, appointed in 2014 by the former Progressive Liberal Party administration.

Yesterday’s farewell ceremony saw the coming together of dignitaries, parliamentarians and supporters from both sides of the political divide, and while delivering her moving farewell speech, the governor general said it was too often that persons speak of vices that divide while little is said about the virtues that unite, such as: love for family, devotion to God, compassion for the elderly and the underprivileged, and the desire to make the country a better place for our children.

“If we do not share these value and aspirations, we must resolve to embrace them, and to do that –  to give real life and vigor to the things that unite us – we need first and foremost to rise above the base level and put aside divisiveness and discord,” the governor general urged.

“We can express differences without being divisive.

“We have all been guilty of sowing discord at one time or another in our lives, but it is never too late to move with purpose to a higher, loftier plain and to do so together, we need to rise above divisiveness, acrimony and come together on common ground to build up this nation.”

The head of state, known for her grace, style and poise, urged guests to learn how to resolve their differences peacefully through persuasive dialogue and not through violence.

“The violence, many must remember, not only comes from the barrel of a gun or the point of a knife or with the pounding of a fist.

“Violence also presents itself in the words that we sometimes utter. Intemperate, inconsiderate or angry speech can inflict much injury on someone’s mind and sense of dignity as the intangible instrument of violence can do to someone’s body, so let us be mindful of this as we aspire to rise above the divisive speech and the divisive conduct to reach that higher plain of co-existence where peace and harmony and mutual respect and goodwill will trend over hateful speech and hostile conduct.”

The governor general also highlighted that Bahamians would have labored in vain as a nation if they cannot be civil to one another.

She said the Bahamas can build the greatest economy in the region, but if Bahamians cannot be civil, kind and compassionate, the country’s success and all other spheres of national endeavor will come crashing down in ruins upon our heads.

“ And so, as I demit office, I commend those thoughts to you in the prayerful hope that they will touch your hearts and minds and help in some way, however small, to focus on building up the national character on a firm foundation of the good and wholesome things we cherish in common, and not the flimsy and fragile footing of awful things that divide us and, in the end, could destroy us,” she said.

Dame Marguerite said throughout her tenure at Mt. Fitzwilliam, her singular desire was to serve the Bahamian people to the best of her ability while upholding the dignity of the office by keeping above the fray of partisan politics.

“But now I am done. I have run my course,  I have finished the race, I did my best,” Dame Marguerite said.

The self-described “barefoot girl from Andros” also urged young Bahamians to pursue their dreams to be whomever they wanted to be.

“Look at me, I’m a testimony. left school at the age of 14 and consequently I did not have a lot of book learning or a college degree, but I want you to know I have master’s degree in common sense. I knew how to use it and to make intelligent decisions and with common sense, hard work, a fierce determination and a kind and loving heart and most important, a love for my lord and savior I was able to reach the highest position in our country,” said Dame Marguerite.

The Governor General thanked the people of the Bahamas, Queen Elizabeth II, former prime minister Perry Christie, prime minister Dr. Hubert Minnis and the staff at Government House for the many courtesies they extended while she served.

The outgoing head of state also recognized her children, her grandchildren, her in-laws as well as her late husband, Lynden Pindling, the first prime minister of an independent Bahamas.

“Everything I am, I owe to you,” said Dame Marguerite of her late husband. “Your undying love and your unwavering support, prepared me for levels I could never possibly imagine. I stand here today as governor general of the Commonwealth of the Bahamas  because of your vision, your determination and dedication to this great country,” Dame Marguerite said.

Also speaking at yesterday’s farewell ceremony, Prime Minister Dr. Hubert Minnis expressed that the governor general has served over the past five years with distinction.

He noted that during hertenure, every generation and people from all walks of life were touched by her grace and compassion.

A final salute to Dame Marguerite will be held this morning (Friday) at Parliament Square before she heads off into retirement.

Veteran politician C.A. Smith will take office as the 10thgovernor general of an independence Bahamas today.