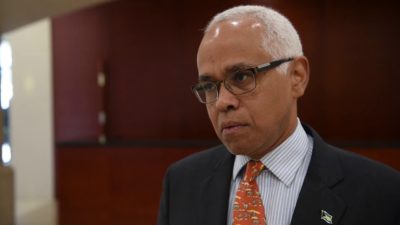 NASSAU, BAHAMAS — Minister of Tourism Dionisio D’Aguilar said yesterday that he has to go back to old conversations he had with investor Leigh Rodney to confirm details on Rodney’s requests of the government, amid threats that if the Minnis administration does not improve the ease of doing business before the next election, the company will close its doors.

Speaking with Eyewitness News Online, D’Aguilar noted he has little recollection on Rodney’s request or concerns.

In an advertisement published in the local dailies, Rodney laid out his frustrations.

“If the FNM wins the next election, without acting upon the promise they made when they were elected two years ago, the Compass Point owner does not want to continue to do business in this country and will therefore close his business,” the advertisement read.

“This paid for advertisement will be the only thing Compass Point has to say publicly regarding this matter.

“If the leadership of this country resorts to publicly distorting this request into derogatory statements, the owner of CP will not respond.

“The CP owner is not interested in making this a public spectacle, he is not running for office.

“He simply wants to make some positive changes that will benefit everyone in The Bahamas.

“Compass Point has chosen to run this ad, so if the property does close, and 60 jobs disappear, the voters will have an accurate understanding of why Compass Point closed, should that unfortunate event occur.”

Rodney, however, did not expound on his specific concerns with the ease of doing business in the country, noting that the advertisement would be the only comments he plans to make.

He said the top leaders of this country have been made directly aware of the issues.

The investor has leveraged for the government to organize a small group that would be able to create a list of recommended changes to “existing laws and regulations”.

The request, according to Rodney, is “simple”.

However, D’Aguilar said he would have to look into the matter, adding that his conversations with Rodney were sometime ago.

However, the tourism minister told reporters this week that Rodney “must remember he is a guest in this country” and he ought to act “prudently and judiciously”.

Rodney’s comments were reminiscent of attorney Fred Smith, who urged Bahamians “not to do business in The Bahamas right now” because of what he said was excessive red tape and client due diligence.

He suggested businesses were being strangled.

Smith opined that the cost and ease of doing business has only gotten worse in The Bahamas.

He lamented the time it takes on average just to open a business bank account.

“The Bahamas is going to be bureaucratically impossible to function in even for Bahamians,” Mr Smith continued.

“It takes six months to open a bank account for a business. Banks I have done business with for 40 years are creating huge problems to wire money out for legitimate businesses we are involved with.”