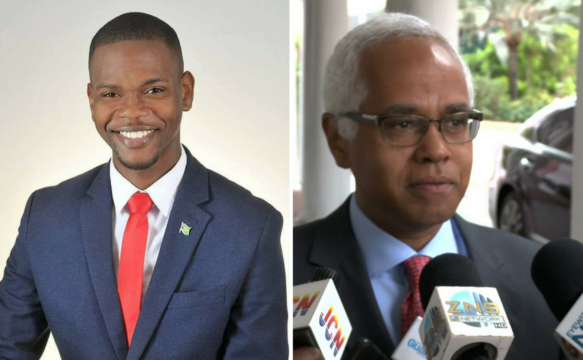 From left: Member of Parliament for Bain and Grants Town, Travis Robinson and Minister of Tourism and Aviation, Dionisio D'Aguilar.

“He was an enormous asset to me, he helped me in many ways – we were a good team,” D’Aguilar said.

“It’s sad that he took the position that he took, sad in the sense that we can no longer work together.

“But it’s what you sign up for. He knew that, and it’s obvious that’s what he wanted to do.”

Following the letter that relieved the youngest Member of Parliament (MP) of his duties as parliamentary secretary, Robinson was met outside by media where he remained quiet.

“I spoke to him this morning but he was resolute in his decision and you may not agree with his decision but he stood by his convictions,” he said.

“I guess you have to respect him for that.

A total of 24 MPs voted in favor of the Value-Added Tax Act 2018, while seven voted against and seven others noticeably absent from the House of Assembly when the vote took place.

D’Aguilar said while he doesn’t know what the future holds in filling Robinson’s former position, he trusts the prime minister will make the right decision.