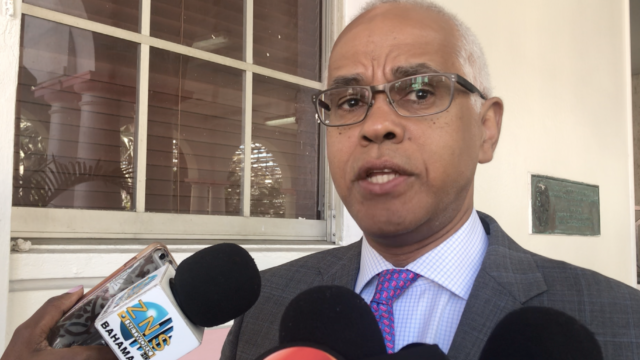 Calls for calmer heads to prevail during negotiation process

NASSAU, BAHAMAS – As the Bahamas Hotel Catering and Allied Workers Union has plans take a strike poll tomorrow, Minister of Tourism, Dionisio D’Aguilar, told reporters on Tuesday that a strike at this present time would be ‘devastating’ for the tourism industry.

“Fifty-five percent of our economy is based on tourism. Taxi drivers, straw vendors, hotel workers, restaurant workers and many; tens of thousands of Bahamians, rely on the tourism industry for their livelihood,” D’Aguilar told reporters before heading to Tuesday’s Cabinet meeting.

At a union meeting held last week, members The Bahamas Hotel Catering and Allied Workers Union (BHCAWU) burned copies of the industry’s proposal, claiming that the terms were a slap in the face to the union.

On Monday, the General Secretary of the BHCAWU, Sheila Burrows, told Eyewitness News Online that her administration simply wants to make things better for hotel workers and the union will not sit by idly and allow the industry to take away what was already negotiated.

The BHCAWU has therefore scheduled a strike poll for tomorrow, and has encouraged all hotel workers to exercise their right to vote.

But yesterday, D’Aguilar called for calmer heads to prevail during the negotiation process.

“With the coming on stream of Baha Mar and with the growth of the other hotels, five to six thousand additional workers have entered into the tourism market and are benefitting from the tourism market so we have to be very, very careful,” D’Aguilar warned.

“I implore both parties to get into a room when calmer heads prevail and ensure that we do not get to where I think we are heading; ensuring that whatever we come up with is good for both parties.”

D’Aguilar said the employer nor the union will be 100 percent happy, but both parties must keep in mind that 55 percent of the country’s Gross Domestic Product is derived from the tourism  product.

“So if these negotiations go awry, this will affect the entire country, so let calmer heads prevail,” he said.

The tourism minister also implored both parties not to get ‘prematurely’ upset over matters that could be negotiated, rather than taking strike action.

“This is a negotiation process and I consider a strike the nuclear option and we are long way from that. I would implore both parties, both the union and employers, to get into a room and ensure that they come to an amicable solution,” D’Aguilar said.

Meanwhile Minister of Labour, Dion Foulkes , also addressing reporters before heading to Tuesday’s Cabinet meeting, said the government is very concerned about the current situation between the hotel union and the Hotel Employers Association.

He said both parties must now agree on a date to resume negotiations.

Foulkes also encouraged both sides to negotiate calmly, especially when it comes to the 15 percent gratuity.

“I may add that the 15 percent gratuity was agreed to be added many years ago as part of the base pay for the workers in the hotel industry, so the national insurance calculation that is made to national insurance and all the benefits that derive from that contribution, the 15 percent is actually included in that, so I am fully sympathetic and understanding from the position of the hotel union, but it is a process that we are engaged with and the government sees this as a top priority.”

The Labour minister said as it now stands, he has to stay ‘above board’ by keeping a middle road and encouraging both sides to reach an agreement that is acceptable to both the hotel owners and the  hotel union.

The BHCAWU strike poll will begin at 8:00 a.m. tomorrow.

Atlantis, Ocean Club and Harbourside will vote at the National Stadium while Towne Hotel,  the British Colonial Hilton, Melia and Lyford Cay will vote at the BCPOU Hall on Farrington Road between the hours of 8a.m. and 6p.m.