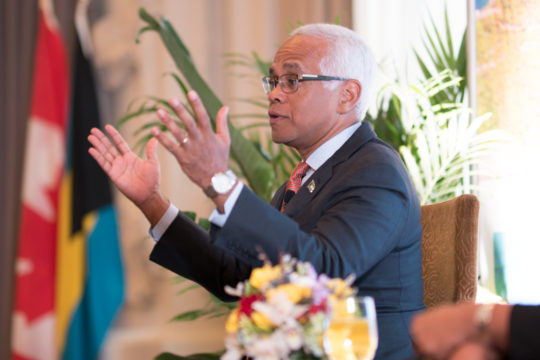 FREEPORT, GRAND BAHAMA – Minister of Tourism & Aviation Dionisio D’Aguilar, on Tuesday challenged residents of Grand Bahama to be creative and innovative when coming up with business ideas for the new mega cruise port.

The Cabinet of The Bahamas, led by Prime Minister Dr. Hubert Minnis, attended the information meeting on Monday, hosted by Carnival to explain plans for the proposed mega port to be built in East Grand Bahama.

The Minister, before attending the Cabinet meeting, said, “It was a very uplifting moment yesterday. Finally, the rubber hits the road.”

The cruise port, he said, will require hundreds of millions (dollars) to build and employ over one thousand people during the construction stage.

It is expected that the Grand Port will be ready to accommodate Carnival ships in late 2021.

“I think it bodes well for the economy of Grand Bahama. What was interesting was the fact that presently they bring 460,000 cruise passengers and they are now estimating they are going to bring over a million, so that’s amazing.

Bahamians must come up with the business ideas to get the people into the community and spend money in the local economy.

This story was contributed by Robyn Adderley – Bahamas Information Services