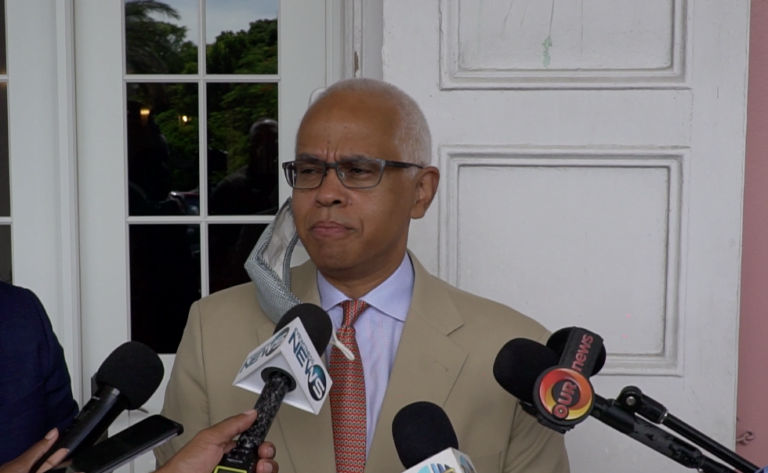 NASSAU, BAHAMAS — Minister of Tourism Dionisio D’Aguilar suggested today that Bahamians and residents, and not visitors, have been exclusively responsible for the influx of cases of coronavirus in The Bahamas.

However, he said the prime minister’s decision to close the borders to all international commercial carriers, with the exception of Canada, the United Kingdom and European Union countries was because the government did not wish to create “two separate set of rules”.

There has been a widespread perception the resurgence of cases since the reopening of the country’s borders on July 1 was the result of imported cases from visitors who departed hotspot jurisdictions.

“Our citizenry took advantage of their increased ability to travel and you will see that all of the cases are domestic grown and the foreign visitors are seemingly to date, not impacting us,” D’Aguilar told reporters on the sidelines of a Government House ceremony.

“But I don’t think anyone has shown me any evidence that it was because of foreign visitors coming into the country that we had a growth in cases, so I think we had that group of protocols working well. It’s just that maybe with hindsight we were not strict enough with Bahamians going in and out of the country.”

There have been 49 new infections in The Bahamas since July 1, pushing the total confirmed number of cases to 153.

For more, tune into Eyewitness News at 7pm on Channel 224

Just cost us $1,000 a guest due in Monday cancelled because she is American and can’t get in

Can someone please explain the rational behind Bahamians and residents not needing to be tested if out of the country for 72 hrs. or less? If I am misunderstanding this rule, would someone clarify it please – it doesn’t take a rocket scientist to figure out this is why we are having such a increase in numbers, and NOT from tourist coming in,who have all the medical documents proving they are virus free

American tourists from healthy US states will very likely lose interest in coming to the Bahamas – especially those that have followed ALL rules and live in states that are not “hot spots” – like all of New England, New York, New Jersey etc etc. Why can’t the system used to allow entry of international tourists identify and deny entry of US citizens that reside in “hot” states only and keep the direct flights from JFK? In fact, healthy US states aren’t even allowing residents from these hot states to visit. Unfortunately, US tourists from these healthy areas will remember how unfair they’re being treated – especially if the ban on commercial flights form the US lasts longer than a few weeks.