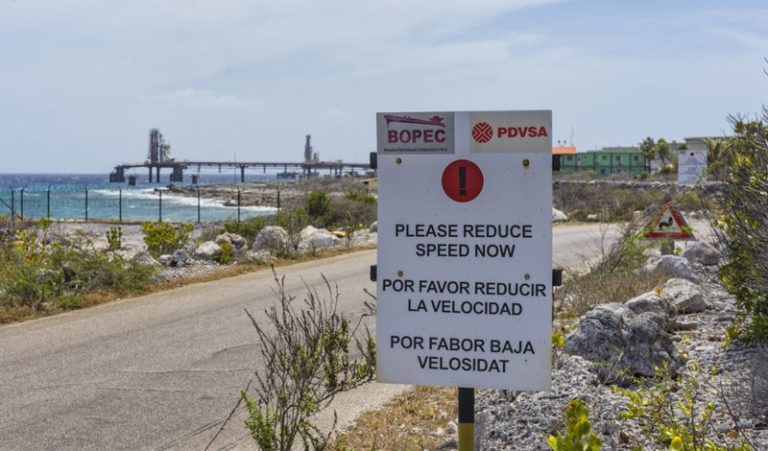 A warning sign stands at the entrance of the PDVSA/BOPEC Brasil Terminal in Rincon Bonaire on the Caribbean Netherlands island of Bonaire, Monday, May 7, 2018, where Venezuela refines and stores its heavy crude. U.S. oil giant ConocoPhillips is pressing for control of Venezuela’s key offshore operations in the Caribbean, seeking to recoup $2 billion from a decade-old dispute with the nation struggling to feed its people, a source confirmed Monday. (AP Photo/Stephan Kogelman)

WILLEMSTAD, Curacao (AP) — A court on the Dutch island of Curacao has authorized the local subsidiary of U.S. oil giant ConocoPhillips to seize $636 million worth of assets held on the island by Venezuela’s state oil company, PDVSA.

The move comes as Houston-based Conoco seeks to recover $2 billion in a decade-old dispute over the expropriation of its Venezuelan oil projects by the OPEC nation’s socialist government, which is struggling with an economic crunch that has caused widespread shortages of food and medicine.

Curacao Economy Minister Steve Martina said at a news conference Sunday that Conoco already had taken control of some oil products at the Isla Curazao refinery, though he did not specify how much.

The Curacao court’s ruling of May 4 is a blow to Venezuela, which uses refineries on Curacao and elsewhere in the Netherlands Antilles to store a significant portion of the oil it exports to its three main foreign markets — China, the U.S. and India.

According to the ruling reviewed Sunday by The Associated Press, the company can seize all oil products stored at the Isla Curazao and the Di Korsou refineries on Curacao. The court also said Conoco can take over any crude oil shipments en route from Venezuela to the island that are within 19 kilometers (12 miles) of the Curacao coast.

An arbitration panel under the International Chamber of Commerce in late April found that Venezuela under the leadership of then-President Hugo Chavez in 2007 illegally expropriated joint venture operations with ConocoPhillips.

The firm turned to a local court to collect the award, but the petition spelling out its demands has not been made public. The $2 billion award represents the equivalent of more than 20 percent of the cash-strapped Venezuela’s foreign currency reserves.