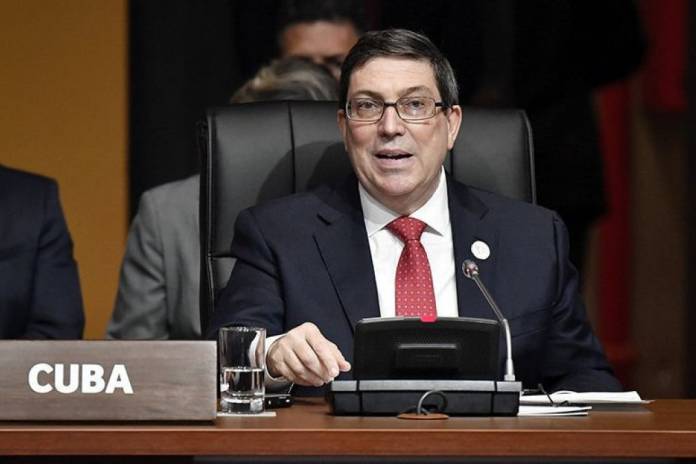 LIMA, Peru (ACN) — Cuba will not accept threats or blackmail from the US government, Foreign Minister Bruno Rodríguez Parrilla reiterated before heads of state and government during his speech at the eighth Summit of the Americas in Lima, Peru.

Speaking at the high-level segment of the hemispheric meeting, which concluded on Saturday, the head of Cuban diplomacy stressed that his country “does not want confrontation, but will not negotiate anything of its internal affairs, nor will it give up an inch of its principles.”

During his speech, the foreign minister stated that, although they have suffered setbacks today, the progress made in recent years in relations with the United States was tangible when, in addition, it has been demonstrated that civilized coexistence within the profound differences between governments was possible and beneficial.

In the current context, he denounced the hardening of the economic, commercial and financial embargo imposed by the US against Cuba, which causes hardships to the people and violates human rights, while at the same time being rejected by the international community and sectors in the US itself.

He argued that there is also growing global condemnation of the occupation of the territory at Guantánamo by the US naval base and the torture and detention center there.

The pretext to reduce the number of US embassy personnel in Cuba and affect the right to travel of Cubans and citizens of that country has been totally discredited, argued Rodríguez Parrilla, referring to the alleged acoustic injuries suffered by Washington diplomats in Havana a few months ago.

At another point in his speech, the minister of foreign affairs described the Organization of American States and its secretary general, Luis Almagro, as mere US instruments aimed at restoring imperialist domination in the region.

He questioned whether the theme of the Summit was precisely that of the fight against corruption, when this is aggravated within the circles of prosecutors and judges who act as political parties.

“It is hidden in this meeting that corruption prevails among government leaders, parliamentarians, conservative politicians and the electoral systems, and in the northern banks where money laundering occurs, including from drug trafficking, among other crimes,” he asserted.

In this scenario, he added that voters are prevented from voting for candidates with strong popular support, such as the former Brazilian president, currently imprisoned Luiz Inácio Lula da Silva, “whose freedom we demand”.

The Cuban diplomat devoted much of his statement to Venezuela, saying that the seriousness of that country’s arbitrary and unjust statement should not be underestimated as “an unusual and extraordinary threat to the national security of the US superpower”.

“The exclusion of President Nicolas Maduro from this Summit is an affront to all the peoples of Our America, and a historic step backwards imposed by the current US government,” he said.