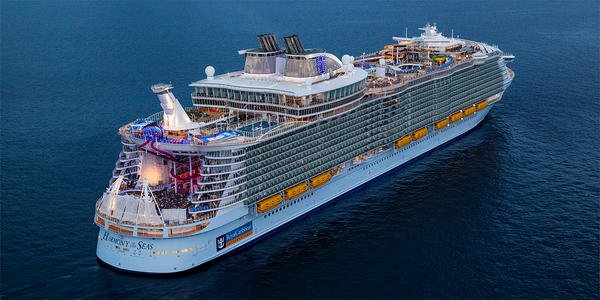 Royal Caribbean's Harmony Of The Seas.

NASSAU, BAHAMAS – After months of being sequestered on board a Royal Caribbean International cruise ship amid the global coronavirus pandemic, at least two Bahamian crew members have been repatriated to New Providence over the weekend and remain in a government quarantine facility.

Coralee Ingraham started her first contract working on Harmony of the Seas in August 2019.

It has been an experience she will not soon forget, she said.

The 44-year-old has been trying to get back home since early March when the severity of the pandemic intensified on cruise ships.

The virus, which originated in Wuhan, China, had already begun spreading on some cruise ships in early February, including Carnival Corporation’s Diamond Princess – which saw the largest cluster of cases outside China in the early days of the pandemic.

After repeated outbreaks of COVID-19 on ships, the U.S. Center for Disease Control and Prevention issued a warning against cruising on March 8 because of the increased risk of infection cruises posed.

All major cruise companies agreed to suspend new cruises on March 13 for at least 30 days in response to the pandemic, but as the situation snowballed, cruises were subsequently forced to suspend operations into May.

By that point, Ingraham said, the ship that she was working on still had hundreds of guests on board, who weren’t made to disembark the ship until March 22.

However, once guests were off the ship, Ingraham, another Bahamian and the remaining crew members could not disembark into the United States.

As a result, the cruise ship and hundreds of its crew members were left floating out at sea.

Ingraham said all crew members were placed into mandatory quarantine from March 22 until April 30.

She explained that the ship had to be anchored off of the coast of Coco Cay in The Bahamas and the coast of Florida, moving between the two points to occasionally stock up on supplies.

“We were only allowed to go to Orlando every other Sunday to get supplies, but nobody was able to come off the boat, and we weren’t allowed to come out the cabins,” Ingraham said.

“…We were having our temperatures checked twice daily, food being brought to us, delivered to our cabin rooms daily.”

April 12, the day her contract was supposed to expire, had come and gone, but she was still stuck on the ship.

“I felt like a prisoner,” she said. She was more than ready to return home.

Ingraham said many weeks would pass with her stuck in her small cabin anticipating her return unscathed.  She said she had reached out to several Bahamian government agencies in hopes of getting help.

She claimed that she even tried to reach the Office of the Prime Minister in March, sending emails and leaving messages with his office, but received no reply.

Last week, after countless delayed efforts to repatriate crew members to their home countries, Royal Caribbean and other cruise companies began embarking on a Caribbean-wide tour to drop off stranded workers.

On Thursday at Coco Cay, crew members from other ships were grouped by their country of origin and placed on the respective ships to be taken home.

After making fervent pleas, Ingraham and the other Bahamian were allowed to remain on Coco Cay until arrangements could be made to go to Nassau.

She said she didn’t care if she had to be quarantined for two weeks or a month, she was just pleading to come home.

The pair only spent one day on the island and were brought to Nassau on Saturday and placed in the government quarantine where they will remain for the next 14 days.

Ingraham said despite the journey and being placed back into quarantine, she is now just happy to finally be on Bahamian soil.

The CDC has now extended its no sail order until late July, or until the COVID-19 pandemic is declared over.