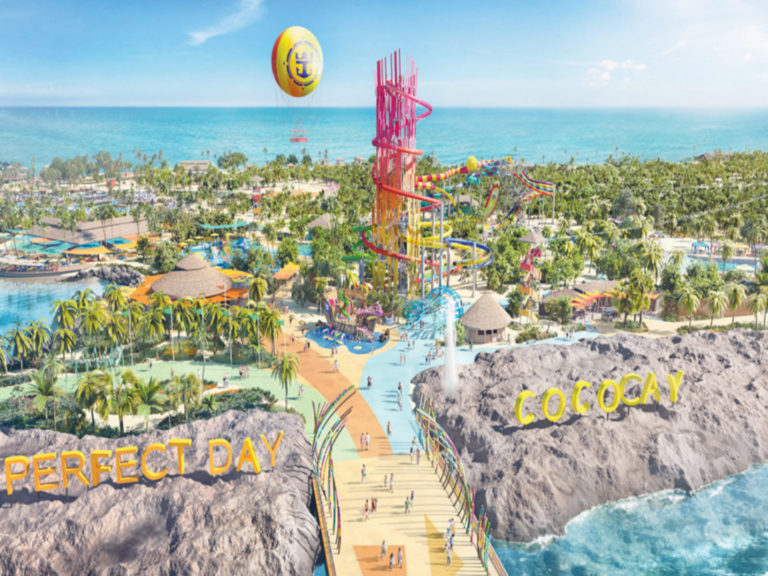 An artist's rendition of the proposed redeveloped Coco Cay. (PHOTO: THE NASSAU GUARDIAN)

NASSAU, BAHAMAS  – The government has once again admitted that a trend in granting approvals to cruise lines for private islands may be taking much-needed foot traffic further away from the local retailers in the capital. It’s an effect opposite to an uptick in passenger arrivals – and economic activity – these mega cruise liners are expected to create.

“In New Providence, total visitor arrivals firmed by 4.1 percent, with air arrivals advancing by 19.2 per cent to 1.2 million, while the sea component fell by 1.5 per cent to 2.6 million, reflecting cruise lines’ shift to making their private islands the first port of entry, as opposed to the Capital,” Deputy Prime Minister and Minister of Finance Peter Turnquest said yesterday, during his contribution to the mid-year budget statement.

It’s unclear at this time if and how the government intends to make up for this shortfall that amounts to around 40k yearly in arrivals to New Providence. Earlier data released by Tourism revealed that total cruise passenger arrivals to the nation increased, with total visitor arrivals to the Family Islands improving by 14.9 per cent.

Still, arrivals to the nation are expected to rise overall – in line with what is expected for the region.

“The outlook for Caribbean tourism in 2019 is cautiously optimistic,” Ryan Skeete, the CTO’s Director of Research & IT said earlier in February. “Global demand for international travel is expected to remain strong, underpinned by healthy economic activity.

“The numbers in October confirmed the recovery, with a healthy 11.8 per cent growth, and by the end of the year tourist arrivals in the last four months were up 9.8 per cent.”

In a recent region-wide press conference, officials revealed The Bahamas was one of several countries that recorded double-digit growth in overall arrivals, along with Guyana, Belize, St, Kitts & Nevis, The Cayman Islands and Grenada.

Good morning. A very timely story. Back in Spring of 1977 I launched the first cruises ever to the out islands of the Bahamas at Great Stirrup Cay in the Berry Islands. The Company I managed was Norwegian Caribbean Lines at that time and the ship name was Sunward II. At that time the traffic to Nassau and especially to Freeport was dropping off. This was the era just before the explosion began in ship building. I felt that if we brought the other side of the bahamas to the cruise passengers with a visit for the day to a place like Great Stirrup it would also drive more demand for the Bahamas in general as there is so much more to the country than just a shopping experience in bat street. The project worked beyond out greater expectations and brought many new guests to the bahamas that would not have been interested in a Nassau or Freeport only short cruise.

Why am I writing this? To remind us all all that we should not reflect on the inherent attraction of what makes something successful. The uninhabited Family island visits brought an exotic and unmatched beauty to the cruise for people who had never seen anything like that before.It raised the bahamian tourism experience and the good word of mouth back home after the trip ended to a whole new level. It’s the difference to the experiences, the unexpected, the naturalness and the uniqueness that made it special and brought the greatest benefit to the bahamas from the stops at Great Stirrup.

The problem we face today is that we are trying too hard to include every single beach style experience at these locations. making it too much like a beach in a populated area like Ciney island or Miami Beach. keep it simple, keep t refreshing, keep it uncluttered and give people the space an tranquility that the family island has like no other destination.

Now, we were operating 700-1000 pax ships back then. today they carry 3 to 5 times that amount. that’s a problem but there are ways to make the experience tropical and exotic without turning it into a crowded shopping mall experience or the back end of a crowded beach at a resort hotel. You might wan to consider having the approval for the designs of the experiences u are allowing at these island to insure their “purity pf experience”

as far as the loss of visitors at the main ports of Nassau and Grand bahama it would be logical to make the use of one of your Family island paradise locations to include a stop for a minimum of 8 hours at Nassau a nd or Grand Bahama island.

I do remember seeing the smiles on people on the Sunward II when they put in their mask snorkel and fins and stuck their head in the water at Bertram’s Cove at great Stirrup and looked up at me and said they had never seen anything like this in their lives.

Thats what we are all looking for in tourism. Something special, new, exciting and when your passenger from Chicago who has never gone snorkeling and never seen a tropical fish before in person, looks at you and says thanks for letting me come and share your paradise, its something you will never forget.

keep the Family island available to cruise ships but don’t et the mega liners turn the experience into coney island or Disney World. Keep it simple, beautiful, and pristine.

Oh, and dont forget to make the big companies come to Nassau and Freeport as part of your willingness to let them experience the paradise of the family islands. It worked before and it will work again.

All the best to all my friends in the Bahamas