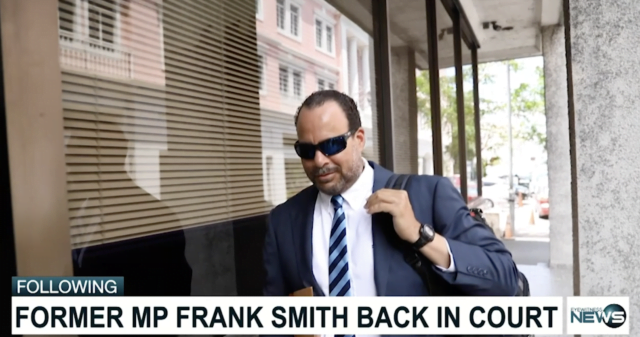 DPP: Magistrate erred when she took extraneous matters into consideration when making her decision

NASSAU, BAHAMAS – The Crown’s appeal of former Progressive Liberal Party Senator, Frank Smith, finally got underway on Tuesday as the attorney general’s office presented its case in the Court of Appeal.

Back in February, chief magistrate Joyann Ferguson-Pratt acquitted Smith on allegations that he extorted $60,000 from Public Hospitals Authority contractor Barbara Hanna, after he allegedly assisted her in getting a half-million-dollar contract to clean the critical care block at the Princess Margaret Hospital.

He said the prosecution proved its case and the evidence pointed to the fact that Smith did indeed demand 5,000 from Barbara Hanna in exchange for the reward of a cleaning contract from the Public Hospitals Authority, of which he was the chairman.

Gaskins said the magistrate’s ruling relied heavily on findings that Mrs. Hanna was untruthful and that the evidence was inconsistent with the allegations when Mrs. Hanna was consistent and her stance that she was extorted never changed during the course of the trial and evidence of the charged were met.

Thirdly, the crown argued that the magistrate’s determination that not a scintilla of evidence was presented to prove that Hanna met Smith before the cleaning contract was signed was severely flawed and there is no requirement of a meeting in proving extortion.

Count four and five of the appeal, according to Gaskins, is that the magistrate’s erroneous point of law, based on the wrong principals to come up with a ruling that no other magistrate viewing those circumstances would have reasonably decided.

Lastly, Gaskins argued that the magistrate allowed inadmissible hearsay and was also inappropriate when she appeared to scold Minister of Health Dr. Duane Sands and National Security Minister Marvin Dames, when asked by Justice Jones if he was implying that the magistrate was biased.

Gaskins said, “some things are better left unsaid” and she should have never connected her commentary on the ministers to her decision.