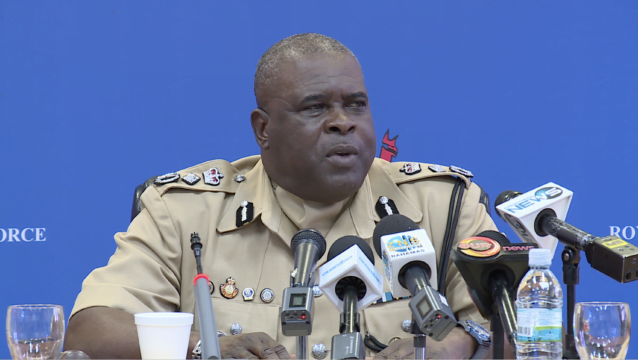 NASSAU, BAHAMAS – Crime is down 17 percent nationwide compared for the first half of the year compared to the same period last year, according Commissioner of Police Anthony Ferguson, who met with the media at Police Headquarters yesterday.

However, notwithstanding the dip in crime, the commissioner said certain categories of crime remain too high.

According to the commissioner, crime dropped by 29 percent in the Family Islands, 16 percent in New Providence; and six percent in Grand Bahama.

With the exception of manslaughter which remained unchanged and attempted murder, which increased marginally, each category of violent crime decreased — in nearly all cases by double digits.

Armed robberies were down six percent — 219, compared to the 229 last year.

Robbery declined by 26 percent, attempted robbery by 29 percent and attempted rape by 56 percent.

Unlawful sexual intercourse, which authorities have said they would combat more aggressively this year, also dropped by 11 percent.

There were double-digit decreases in crimes against property, with the exception of shop breaking with dropped nine percent.

Housebreaking decreased by 21 percent, and stolen vehicles dropped by 37 percent.

Addressing the media, Ferguson said despite the downward trend there remains concern about the fear of crime.

He said law enforcement agencies have been working assiduously to reduce this.

As a part of this effort, the commissioner said police visibility has been increased in the various community and police continue to execute intelligence-led operations.

“Today’s criminals are ruthless in committing criminal acts and often endanger the lives of innocent persons in the process,” he said.

He continued, “Ladies and gentlemen, I reiterate that the police [are] more intentional in our approach and strategies.

“For the first half of this year we have conducted 30 major intelligence-led operations throughout the Commonwealth of The Bahamas.

“As a result of these operations, a number of persons were arrested and put before the courts.”

The commissioner said authorities recognize police operations will inconvenience some, but the overall safety of the public is “of the utmost importance to us”.

Earlier this year, Ferguson said he was satisfied that his policing plan for 2019 was yielding positive results.

While the statistics presented yesterday reflect a continued downward trend in crime, Ferguson said police have been more intentional with their approach and crime fighting strategies this year.

Warning residents against harboring criminals or those wanted for questioning in connection to crimes, Ferguson said a number of suspects have sought to evade authorities by leaving the country.

However, he said those individuals can only evade the law for a season, as the “arm of the law is long”.

A man who is believed to be responsible for a murder in 2017 was recently arrested in Haiti.

While categories of violent crimes in New Providence all trended downward, the data released by police showed the reversed trend in numerous categories of crime, including murder and attempted murder

There was one incident of armed robbery during the first half of this year.

There were no incidents of armed robbery in the same period last year.