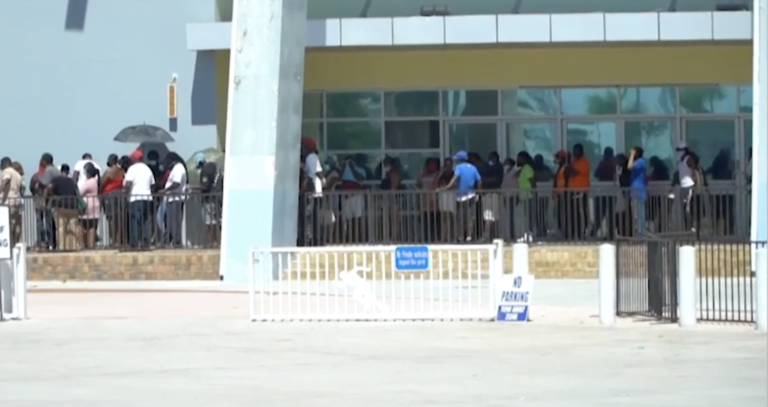 NASSAU, BAHAMAS — With businesses shuttered and thousands unemployed due to the country’s lockdown to curb the spread of the coronavirus, thousands of people have had to turn to the government’s food assistance program in order to feed their families.

Lisa Brown, a mother of one who asked that her name be changed, told Eyewitness News that she never expected to be in the position where she couldn’t afford food.

Brown said she had been working a full-time job up to March.

She said due to the lockdowns she and her mother became temporarily unemployed.

She noted that despite receiving the first few weeks of assistance from the government’s unemployment benefits, she has still not been able to keep up with her bills including rent.

Brown said for the first time in her life she had to go to Social Services to seek food and rental assistance because she was nearing desperation.

She claimed that after applying online, she was advised to go to her nearest location, but was then informed that she would have to wait for a social service worker to review her application and reach out to her.

Brown said when she inquired about at least getting a food voucher she was once again told she would have to be interviewed first.

“This was my first time ever going to social services because I believe in it just being for persons in need,” she said.

“Why isn’t there a simpler process? Why do the people there treat you so bad?”

“I mean how hard is it to give someone in need a food voucher for $50 dollars,” she added.

“It’s disheartening. All this signing up and long lines in 2020. something needs to be done.”

Eyewitness News was able to connect her to the Bahamas Feeding Network to receive a food package and be placed on the weekly distribution list.

While she expressed her appreciation for the food assistance, Brown said she is afraid that things will get worse.

Joan Russell, 58, said she was living a comfortable middle-class life before the pandemic, but now cannot afford to fill the two five-gallon bottles of water in her home.

Russell’s name has been changed to protect her identity.

She indicated that while she has been getting by on packaged food, it’s painful knowing she can’t even afford meat or vegetables.

“I lived a nice middle-class life before this. You never knew it would come to this,” continued Russell as she sobbed during the interview.

On Sunday, Prime Minister Dr. Hubert Minnis revealed that the government is supporting the National Food Distribution Task Force with $1 million per week to assist more than 110,000 people.

Now entering its 11th week, Minnis advised the task force will move to restructure aid into three categories: most, moderately and least vulnerable; with assistance to be distributed weekly, bi-weekly, and once a month, respectively.

The prime minister said 27,705 households have registered for assistance, to date.

Yesterday, Great Commission Ministries President Bishop Walter Hanchell said his church shelter is full to capacity and people are calling every day looking for food and shelter after being evicted from homes.

Hanchell, who appeared on Beyond the Headlines with Clint Watson, said “there are people who will survive COVID-19, but you know what will take them out, lack of food, famine, hunger”.

He applauded the government’s efforts to provide adequate funding for feeding people in need, and called for a greater focus on ensuring people do not go homeless.

Hanchell suggested that the government match the same level of funding for rental assistance to help people living in apartments who have been evicted or are on the verge of eviction.

He also suggested that the government establish housing for people who may have been evicted.

“I don’t care how much food you have, if you don’t have a roof over your head, you can’t eat that food you cant enjoy the food,” he said.

“You cannot just feed the people and people end up on the streets because they go together.”

He pointed out that people have not worked since March are now no longer to pay their bills because they are unable to work and unable to earn any income.

“I am calling on the prime minister to please find some money to offer rental assistance to our community,” Hanchell added.

“The landlords are not being paid and they have obligations. The tenants are not receiving income.

“We need to look at the big picture and provide some relief in terms of rental assistance.”

They mussie want a hungry and desperate population who will agree to anything in order to feed their children????

Intentional or not, that maybe the end result.