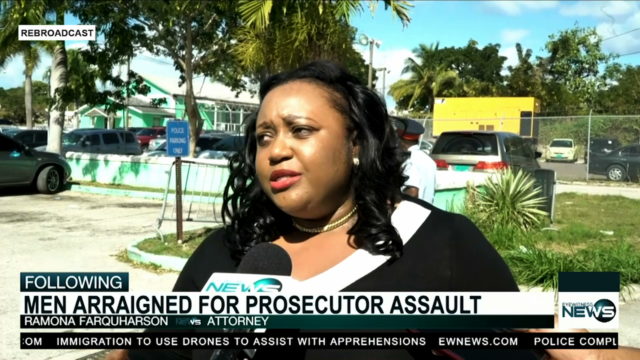 NASSAU, BAHAMAS – The two men believed to have assaulted prosecutor Joel Seymour on January 5 were arraigned in the Magistrate’s Court again last Friday, January 11, as prosecutors tacked on another list of charges.

The pair originally appeared in court last Wednesday, January 9 on a single charge of causing harm, but were hauled before the court again on Friday to face four new charges.

They were also charged with three counts of obstruction of justice.

According to reports the altercation took place on Baillou Hill Road.

The two men, who are brothers, are being represented by Attorney Ramona Farquharson.

The duo pled not guilty to all four counts.

Attorney Farquharson told Eyewitness News Online Friday that she stands with her clients and will defend their innocence.

“There is video footage which captured the events of that night. The video footage was provided to police and so here it is the police have that footage and still decided to take this particular course of action,” she said.

She noted that as the case progresses, “there seems to be more issues arising.”

“In particular the office of the director of public prosecutions, where Mr. Seymour works directly with, they have now inserted themselves in this process. Usually, the matter would be prosecuted by a police prosecutor but they have now indicated that they are now going to take over the matter and deal with it.

“Here it is now his coworkers have stepped in this morning and noted that they are taking over the matter.”

The two men have been remanded to the Bahamas Department of Correctional Services (BDOCS) until their trial which has been set for February 18.