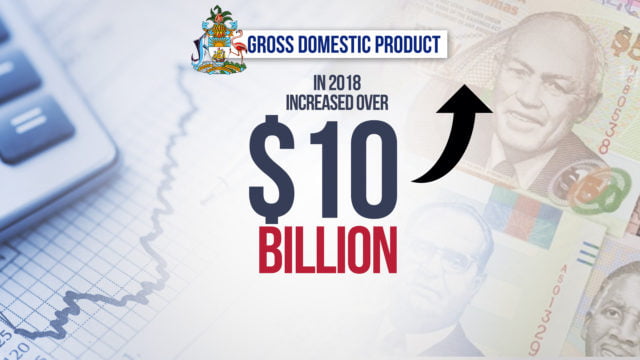 NASSAU, BAHAMAS – The country’s Gross Domestic Product (GDP) experienced marked growth in 2018, when compared to the same period reviewed in 2017, according to statisticians within the Department of Statistics.

According to a recent report released by the Department of Statistics, the country’s GDP increased by an estimated $10.7 billion dollars.

The National Accounts Section of the Department of Statistics revealed that the multi-billion-dollar increase represents a 1.6 per cent growth.

There are 17 groups which are said to contribute to annual GDP statistics, Terah Newbold, Supervisor, National Accounts Section noted.

Of the 17 groups, nine of them contributed to the overall increase in GDP, according to Newbold.

Newbold said the positive growth between 2017 and 2018 is good news for the country’s economy.

“An increase indicates that the economy is better than it was recorded in 2017,” she said.

Newbold said the growth is encouraging; especially on the heels of a financial snapshot released by the Ministry of Finance late last month which indicated that the national deficit has seen a marked decline.

While government expects the national deficit to continue with a steady decline, Newbold said she cautious with predicting a continued growth in GDP considering that anything could shift the scale.

“Anything can cause the economy to increase or decrease; but, it is the job of the National Accounts Section to calculate the numbers as they come in. We cannot predict what will come in,” she said.

The 2018 GDP figures in the National Accounts Report will be available on the department’s website on or before June 13.

Umm… i think maybe there was a miscalculation somewhere?