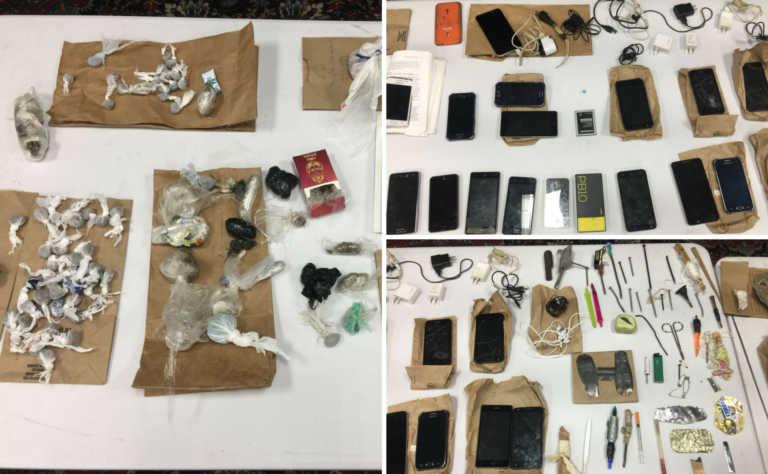 Some of the contraband confiscated from the Bahamas Department of Corrections early Wednesday morning.

A senior officer in the Bahamas Department of Corrections (BDOC) told Eyewitness News Wednesday that there is widespread corruption within the organization, as a multi-organization operation at the state run prison led to the discovery of illegal weapons and drugs.

Bernardette Thompson-Murray, deputy commissioner of corrections, said that significant amounts of illegal contraband found at the correctional facility is evidence that deep rooted corruption exists within the BDOC.

“Like any organization, there is some form of corruption among staff at BDOC,” admitted Thompson-Murray.

“Prison officers are checked upon coming onto the compound, but if there is a network among officers, you will find that things will get through.”

The revelation came on the heels of an early morning search among inmates at BDOC, which uncovered a shocking amount of contraband.

The early morning sweep came as a result of a video, filmed by an inmate at BDOC, which subsequently went viral.

“Operation SIP, started at 10:00 p.m. Tuesday and ended at 6:00 a.m. Wednesday. Based on intelligence, we conducted an entire search which uncovered 19 cellphones, 11 cellphone chargers and 42 homemade shanks. We also recovered a large quantity of suspected marijuana,” shared Clayton Fernander, assistant commissioner of police.

“We have a lot of work to do with respect to the items that we have retrieved. There are inquiries to be made and those persons found with the contraband will be interviewed and an investigation will be launched into how the items made their way onto the compound.”

Authorities confirmed that an internal investigation will also be launched at BDOC.

“Once we identify those officers who are corrupt, we will deal with them and put them before the court,” affirmed ACP Fernander.

While authorities have identified corruption as a major link to the trafficking of illegal contraband onto the compound, Thompson-Murray suggested that a lack of sufficient resources at the facility is also to blame.

“We have to present to the government our needs assessment which will include requests like surveillance resources and all the other stuff that goes along with it. This includes training as well. We also have to address the importance of officers carrying out regular searches because its key. Once officers search (regularly), it can prevent things from coming in. But that is only if every officer does what is right,” she said.

Authorities have also suggested the need for increased searches on the compound.

“Based on our operation this morning, and the extent of our findings, we are going to re-strategize with the way we move forward – ensuring that these searches are done as frequent as we can,” confirmed ACP Fernander.

“We will also be tweaking the vetting process (of officers) across the board, no doubt about it.”