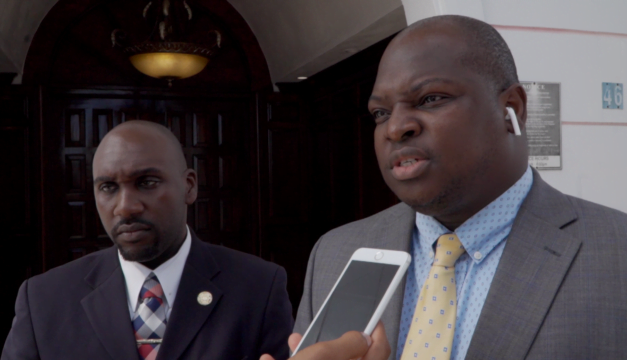 NASSAU, BAHAMAS — The death of a man, who was escorted out of a club by an officer and subsequently turned his gun on him, was yesterday ruled a lawful killing.

A coroner’s jury investigating the December 13, 2014, death of Andrew Jamal Stubbs determined that the officer acted lawfully when he shot and killed Stubbs outside the business establishment.

Stubbs was shot in the head.

According to the evidence, Police Constable Kevin Deveaux smelled marijuana at the club and found Stubbs smoking inside.

The officer escorted Stubbs outside, where he began making death threats.

The officer said Stubbs left and returned with a firearm.

According to a witness account, Deveaux identified himself as a police officer and requested that Stubbs lower his weapon, but he did not drop his gun.

According to the evidence, the officer observed Stubbs loading the weapon, and being in fear for his life and the lives of others, he shot Stubbs.

Outside the court, Munroe told Eyewitness News Online that he and his client were satisfied with the verdict.

“First let me say that it is never an easy situation with the loss of somebody,” Munroe said.

“It is not an easy situation for persons who have to face the music for someone who is deceased.

“But, as it relates to the verdict itself, I am comfortable with the verdict because all the verdict did was confirm the evidence that was read in the court, [which] proved that my client was indeed justified in his actions.”