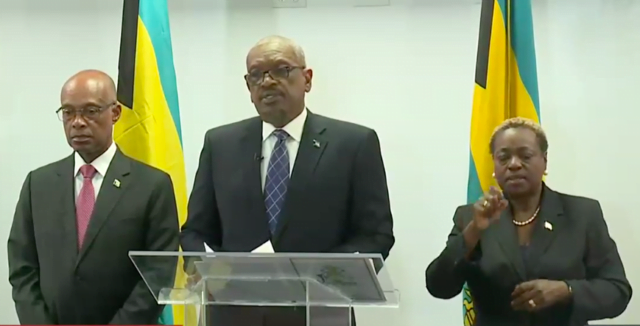 Minnis’ comments came after a 61-year-old Bahamian woman was confirmed as the first positive case of COVID-19 in the country.

Officials confirmed the woman tested positive at midnight Sunday; however, the patient’s level of exposure to the wider public is unknown at this time.

With large public gatherings showing links to the widespread of COVID-19, the prime minister announced that all schools will be closed as of today, until April 14.

“This disease is threatening our country, our families and our very lives,” Minnis said.

“This is a national fight and we all have a role to play in this crisis.

“It is a battle for which must all be prepared.”

He noted all national sporting events will be postponed until further notice and there will be an indefinite suspension of all permits for use of public open spaces.

He also announced the expansion of additional travel restrictions to be introduced on March 19.

Foreign nationals and foreign individuals who have traveled within the last 20 days from the United Kingdom, Ireland and Europe, will be prohibited entry into The Bahamas.

This is in addition to the ban placed on non-residents who have traveled to Iran, South Korea, Italy and China in the last 20 days.

“This restricted travel list of countries will be continuously monitored and updated as necessary,” Minnis said.

“All Bahamian nationals and residents returning to The Bahamas through any point of entry from any of the restricted countries or an area where community infection and spread is present will be quarantined or be placed under self-isolation upon arrival and are expected to follow the protocols of the Ministry of Health.”

He further advised against non-essential travel by Bahamian nationals and residents.

Minnis also urged all who may be sick to stay home and stay away from large crowds and gatherings.

However, in more severe cases, infection can cause pneumonia, severe acute respiratory syndrome, kidney failure and even death.

The prime minister advised those who believe they have symptoms associated with the virus to call a clinic, doctor’s officer or the Ministry of Health’s 24-hour Hotline, so not to put others at risk.

Minnis announced that Doctors’ Hospital on Blake Road has been secured as a facility to treat individuals who test positive for Covid-19 and another facility is being secured for quarantine purposes.

He said the facility will be secured by Royal Bahamas Defense Force Officers and no visitors will be allowed into the facility unless authorized.

He assured that those treating patients will utilize various protocols to protect themselves.

The prime minister added that he has consulted with the Opposition Leader Philip Davis and pledged to keep him informed of the government’s response, with hopes of working together in the spirit of cooperation.

In a statement on the matter, Senator Dr. Michael Darville, chairman of the Progressive Liberal Party task force on COVID-19, accepted the prime minister’s invitation.

“The PLP Taskforce has already met and is ready to make available to the government the experience and expertise which is represented on our taskforce,” he said,

“Experience in other countries clearly demonstrates that the fullest possible communication will help Bahamians to know how to protect themselves during this time.

“Full transparency will also help to reassure the public that everything possible is being done to safeguard them.”

What about the cruise ships?