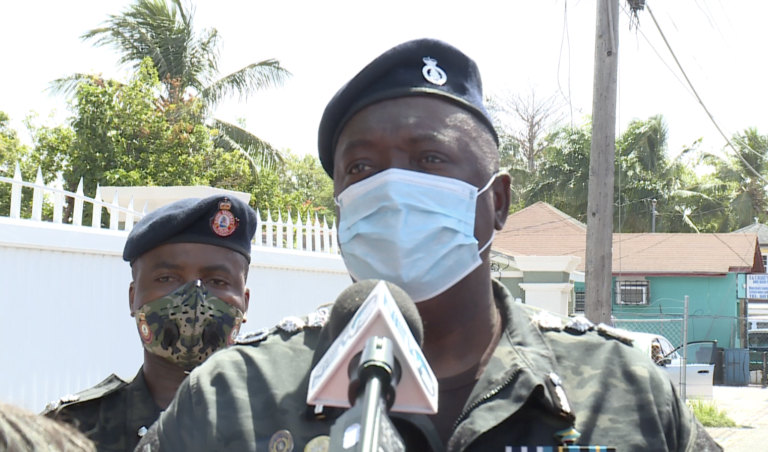 NASSAU, BAHAMAS — As Hurricane Dorian threw the nation into crisis and response mode a year ago, emergency teams including officers of the Royal Bahamas Police Force leaped into hazardous conditions to save lives and recover the dead.

Some officers lost their homes and despite being left with only the clothes on their backs after the storm raged over Grand Bahama and Abaco, pressed on out of duty and love of country.

Speaking to Eyewitness News, Commissioner of Police Paul Rolle reflected on the enormity of the storm, its devastation, and the arduous process of operating in parts of two islands that looked war-torn.

Dorian laid waste to communities in Grand Bahama and Abaco on September 1-3.

The storm lingered over Grand Bahama for over 48-hours, blasting the island with howling 185 mile-per-hour winds.

Land areas were indiscernible from the ocean as the storm generated 18-23 of coastal flooding, trapping residents in their homes for days, and creating water graves for others.

The tales of survival and near-death were vast.

In the immediate aftermath of the storm, Rolle, the then deputy commissioner of police and former head of the Central Detective Unit, said he had dealt with death and murders, but no training could have prepared officers for what they saw — bodies strewn about the ground, covered in mounds of debris.

The storm destroyed communication and utility infrastructure, and the central command of the force was unable to communicate with officers who resided in parts of both islands and surrounding cays.

“No one could anticipate the magnitude of the damage,” he said, noting that police cars, school buses, and a $200,000 32-foot contender were “flipped like little toys”.

“We had no means of getting from Marsh Harbour into the cays to check on our officers. We didn’t know where they were. We had not heard from them.”

Much of the island remained submerged in water and the north was disconnected from the central part of the island.

Rolle and a team flew into and landed in Treasure Cay, but officers in Marsh Harbour did not realize they had arrived on the island.

Before the storm, local law enforcement officials met with numerous agencies from the US and the United Kingdom, including the Royal Navy to devise contingencies plans for an immediate response.

Helicopters and vessels responded from The Bahamas’ regional and international partners, including the US Coast Guard and the Cayman police force.

An area near the Marsh Harbour Clinic was used as a landing zone for helicopters.

Officers began evacuating the countless sick and the injured to New Providence.

That effort with the government’s assistance continued for many more days and weeks.

On the ground in Marsh Harbour, which resembled a wasteland, Rolle and his team began their initial assessment.

“You stop into one building and you see the dead bodies,” he said.

“I think in one, there were about five or six persons dead in one place.

“There was another person, a man, decapitated on the side of the road in Treasure Cay.

“And we went into Treasure Cay where the police stayed, as we went back up there.

“And there were five-foot barracudas on the side of the road… and a shark because the water came from the east side straight across to the west side, and Treasure Cay itself was underwater.”

He said vehicles had to be commandeered to get around.

Communication was reinitiated via Aliv’s network and families in unaffected islands, who had not heard from officers in several days, heard their voices for the first time.

Officers stationed in Abaco were sent to New Providence.

But the officers who relieved them in the first few weeks before the defense force erected a tent city, had nowhere to live and were “just living” and searching for survivors.

As it relates to The Mudd, Rolle said: “Nothing was left standing.”

On the first day in the immediate aftermath of the storm, over 800 people were evacuated, Rolle said.

The following day Bahamasair arrived on the island to evacuate displaced residents. However, Rolle said hundreds more had left the island.

According to the commissioner, evacuees began to be documented coming into New Providence when Social Services set up at Odyssey Airport.

“By that time hundreds of people had already left the island and they came into Nassau and I guess they were going into shelters and wherever, and [that’s when] they started taking the records,” he said.

“That also accounted for why in the first instance we had these high numbers of people reporting missing because there was no communication — relatives didn’t know where their relatives were.”

He said the missing figures dropped as families were reunited with loved ones.

“People keep saying well one person gave a number; next one [gave another],” Rolle said.

“And we began then, we had the missing, and we began finding bodies. The issue then was to try and get those identified.

“We identified a number of them and then of course there were some where nobody could link to say well, this one is a loved one.

There was a high number of undocumented persons, which I believe lent to the difficulty in doing that.”

The official death count stands at 74, while a reported 279 people remain missing, according to authorities.

The remains of 55 Dorian victims were buried during a remembrance service on Abaco in May.

The process of identifying them remains ongoing as laboratories have since shifted focus to respond to the ongoing coronavirus pandemic, according to the commissioner.

“In terms of trying to get those persons identified, that’s a lengthy process because it is so many samples,” he said.

“The lab will whenever it is ready, if they identify, it will let us know.

“And what we will do is connect their family and they will be able to mark the graves of their loved one or if they want, I guess they can go through the coroner and have them removed.

“But by and large, the policing response to that was something that we have never experienced before.

“I mean, this isn’t something you could plan for. We do what we normally do in preparing for storms, but this one, to see the level of devastation — to have a storm where when you go outside, all of your cars are underwater.”

The damage to households and infrastructure was staggering, costing an estimated $3.4 billion.

The high death toll, countless missing people, and displacement of residents were unprecedented in The Bahamas’ modern history.

The storm remains fresh in the collective consciousness of Bahamians, who now monitor the smallest weather systems in the Atlantic with anxiousness.

The nation held its breath as Hurricane Isaias, the ninth named storm and second hurricane of the 2020 hurricane season, took aim at Andros after it was expected to impact New Providence and other islands in earlier projections.

The all-clear was given on August 2 and the damage in the storm’s wake was minimal.

Cleanup and recovery remain ongoing on both islands with over $30 million spent on clean-up alone.